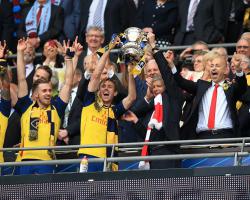 The Gunners have returned to London from a successful tour to the Far East where they won the Barclays Asia Trophy with an impressive 3-1 victory over Everton on Saturday.

Arsene Wenger's men will now step up their preparations for the start of the domestic season by hosting the Emirates Cup at the weekend, with games against Lyon and Wolfsburg, before the traditional curtain-raiser of the FA Community Shield against Chelsea at Wembley on August 2.

Having brought in veteran goalkeeper Petr Cech from the champions, Arsenal have again signalled their intent to build on FA Cup success and so close the gap on the Blues and Manchester City.

Gazidis accepts while the Gunners may continue to face a somewhat uneven financial playing field, the squad should be positive of what they can achieve going forward.

"We always have to do things better than our competitors, that is our challenge, but there is a real belief we can win the Premier League and compete to win major trophies in the next few years," Gazidis said in an interview with Fox Sports Asia

Wenger is preparing for a 20th campaign in charge of the Gunners.

Gazidis believes the 65-year-old Frenchman, whose last contact extension took him up to the summer of 2017, still has the appetite for more success following almost a decade without silverware before back-to-back FA Cup successes.

I think Arsene has had tremendous support from the board and in return Arsene has really put the club first and made sure we progressed through that period and come out of it strongly," the chief executive added.

"I joke that we are developing our training ground and one of the things we are doing is putting a cryo-chamber in there and if we put Arsene in there we can preserve him for a little longer.

"But he is in great shape - fit, enthusiastic, as hungry as ever and ambitious as ever, and he can see what is happening with this squad and he is very excited about the direction of travel so we aren't thinking at all about changes.

"Of course long-term you have to have the right infrastructures in place and a lot of work is going into that with Arsene's support and involvement as he knows at some point - and I hope that will be far down the road - he will step aside and someone will step into his large shoes."

Wenger remains keen to add further quality to the squad before the end of the transfer window.

Real Madrid's Karim Benzema is one reported target, while Borussia Dortmund moved to warn Arsenal off any interest in Gabon international Pierre-Emerick Aubameyang.

Competition is set to be fierce for a place in the Arsenal starting XI next season, provided everyone remains fit.

He told Arsenal Player: "I have played two games (in Singapore) and there are another two games coming up next weekend after another tough week of training, so I am feeling good.

"I think you feel better day by day

They make the sessions individualised, so they know what you need in your position.

"Each session gets harder and harder