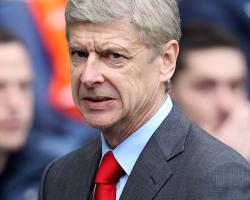 The 64-year-old's current contract expires at the end of the season and negotiations have been going on for some time to tie up Wenger's long-term future, with the club currently top of the Barclays Premier League.

Wenger continues to play down the concern when pressed on the issue by the media, but last month indicated he had made a decision.

Gazidis also indicated there was no panic over time frames when speaking at the launch of Arsenal's new long-term partnership with Puma, which will see the company become the club's official kit suppliers from July 2014.

"We have always been completely behind him. We are comfortable in the position and relaxed about it. Arsene will be extending with us and at the right time we will make that announcement," Gazidis told the news conference.

Meanwhile, Wenger has hit back at old rival Jose Mourinho's claim that his side get an easy ride on fixtures.

Chelsea boss Mourinho said last week that the Gunners get a certain "influence" when it came to their schedule, something Wenger was eager to refute as he prepared for the trip to Southampton.

"In the last five years all the objective studies that have been made show Arsenal had less rest than any other team in the top four," he said.

"That is facts. It has nothing to do with my opinion. It is an independent company that made (the study) that shows Arsenal had less rest than any other team in the top level."

It is understood that the study Wenger referred to was conducted as part of an internal analysis of Arsenal's fixture programme.