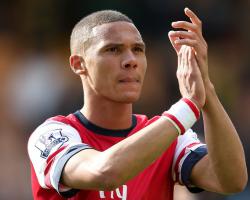 Arsene Wenger's side take on Hull in Saturday's FA Cup final looking to pick up their first silverware since beating Manchester United on penalties in the same competition back in 2005.

No-one from the Arsenal squad that day remains at the club, with a number of big-name players coming and going since the Gunners' last trophy success.

But Gibbs feels the current crop, including the likes of England's Jack Wilshere and club-record signing Mesut Ozil, is the most well-equipped squad he can remember to end nine years of hurt.

"Me, how I feel when I'm out on the pitch, I feel this is the best team I have played in for a long time," he said.

"I just feel the team has got a good balance and there is a strong desire in the team to want to win every game and everyday coming in in training everything is 100 per cent."

Gibbs was an unused substitute when Arsenal lost the 2011 Carling Cup final to Birmingham and has seen his career stutter due to injury in recent years.

But the 24-year-old, who would not be drawn on missing out on a place in Roy Hodgson's World Cup squad, now feels he has put the worst of those problems behind him as he prepares for the challenge of Hull,

"This has been my best season numbers-wise and stats-wise," he said.

"I had a bit of a dip at the start of the year but managed to finish off strongly and now I'm looking forward to the Cup final and to next season.

I'm not really focused on that (World Cup squad) now

I have a big game on Saturday that I want to win.

"We know we have the quality to win the game

It is massive, we take all competitions seriously and at the end of your career you want to look on what you have won.

"This is a chance to look back on what has been a good season and say we managed to win the FA Cup."