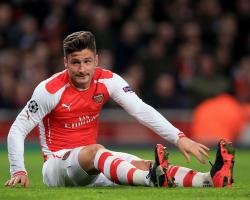 Giroud missed a succession of chances as Arsene Wenger's side slumped to a shock 3-1 last 16 first leg defeat, and the France international is keen to make amends when the Toffees visit the Emirates Stadium.

Giroud first faces an anxious wait to see whether he will retain his starting spot for the meeting with Roberto Martinez's team as Arsenal attempt to maintain their grip on third place in the Premier League.

But Giroud insists he should not be judged on a frustrating midweek display that ended with his withdrawal on the hour.

"I am not a better or worse player than three days ago, it is just about confidence and keeping strong," he said.

"I am really hurting, more than disappointed, it has been embarrassing for me

But I have never given up in my career and sometimes I have had tough games like that before.

"It was difficult because nothing went right, everything was tough for me

It was not my day.

"When you are a striker people expect more from you

I did well recently and scored a lot of goals, but when you miss chances it is like that - you have to question yourself

I will keep working hard and bounce back as soon as possible."

The embarrassing defeat to Monaco triggered renewed criticism of Wenger and his players, with the manager's position once again called into question, and the Frenchman admitted his side now face a test of their resilience.

"For us what is important is to respond well

We are on a strong run in the Premier League and we have to respond to that disappointment in a strong way on Sunday afternoon - that's all we can do," Wenger said.

"We are back in the top three in the Premier League, we have an opportunity to stabilise this position and we want to take it.

"We are a big club - that means we are a club who interest many people and that gives us a stronger responsibility.

"Of course when you come out from a disappointing game like Wednesday night, you don't expect people to applaud

It's absolutely normal that we get criticised."

Arsenal midfielder Jack Wilshere is again missing after undergoing further surgery on a long-standing ankle problem, while Mikel Arteta and Mathieu Debuchy are also ruled out for the Gunners.

Meanwhile, Martinez has urged his Everton players to relax and start enjoying their football again in the Premier League - like they have done in Europe - as they look to climb into the top half of the table.

The Toffees have been impressive in continental competition this season and are now English football's sole representatives in the Europa League after their 7-2 aggregate win over Young Boys on Thursday.

"It's true that we got into Premier League games with too much responsibility, feeling there's more to lose than to gain," Martinez said.

"Maybe now is the time to take things one game at a time and try and enjoy our league games.

"Arsenal will still be a strong team, though

They will not have suffered a psychological setback from the defeat to Monaco."

Everton have no concerns over in-form striker Romelu Lukaku even though he was withdrawn three minutes into the second half of their 3-1 second leg win over Young Boys at Goodison Park.

Martinez also has John Stones and Aaron Lennon available after the pair were suspended and ineligible respectively for the last-32 tie against the Swiss side.

However, Everton are without Christian Atsu (illness) and Bryan Oviedo (hamstring), along with Steven Pienaar, Aiden McGeady and Tony Hibbert (all knee).