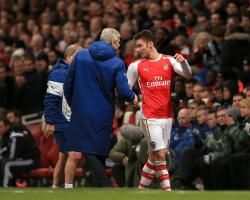 Giroud, who missed almost three months of the season after breaking his leg in August, reached double figures for the campaign as he struck twice in two first-half minutes as the reigning FA Cup holders eased into the last eight.

The 28-year-old remains an important part of Wenger's side despite the summer acquistions of Danny Welbeck and Alexis Sanchez - who started either side of Giroud in a strong Arsenal side - and the Gunners boss feels his compatriot is now a much more rounded player than the one he signed from Montpellier in 2012.

"We controlled the game from the first to the last minute," Wenger said.

He understands what top-level football demands, works with a great concentration in training and he has improved tremendously on his mobility, his technical quality and of course his body is very strong

He uses it very well."

Giroud put the game beyond doubt as he thrashed home Sanchez's corner with a well-taken first-time finish but it was his first strike, just two minutes earlier, which lit up the Emirates on what was a run-of-the-mill afternoon for the home side.

All 11 players touched the ball as Santi Cazorla, captain for the day, threaded a pass to Kieran Gibbs to cross low for Giroud to finish and Wenger was left purring at the accomplished move.

"The first goal is what we try to do in our game and our build-up," he said.

"The second goal shows that the game belongs to the players as well because it's a consequence of two players who respond quickly to a situation, analyse it quickly and do what they want to do well

That's basically what it was

It's a consequence of intelligence and technique."

Giroud's position as Arsenal's main striker had been under threat after the arrivals of Sanchez and, in particular, Welbeck but Wenger insists if the France international is named in his starting line-up he will always play through the middle - with the likes of former Manchester United man Welbeck being accommodated elsewhere.

"One of the reasons I bought him (Welbeck) is that he can play central striker and wide," Wenger added.

He can play central striker like he did for a long time but the most natural centre forward we have is Giroud.

"All the strikers we have can play in different positions

The only one who can only play centre forward is Giroud, so when Giroud plays the others have to move out wide."

Middlesbrough had beaten reigning Premier League champions Manchester City at the Etihad Stadium to reach this stage - but Aitor Karanka's side never looked like producing similar heroics in north London.

Giroud's double knocked the stuffing out of the visitors, who had only one shot on target throughout the game, with Wojciech Szczesny's clean sheet coming under the most threat in injury time as Kike headered Ryan Fredericks' deep cross against a post.

And Karanka thought his side may have been lulled into a false sense of security having already collected the scalp of City, as well as taking Liverpool to penalties in a Capital One Cup tie at Anfield, as the second-placed side in the Sky Bet Championship came up short.

"I think, especially in the first half, we haven't played in the way we like to," he said.

"It is difficult to beat teams like Arsenal and if you want to take something from games against Arsenal today you have to be perfect, like we were at the Etihad Stadium, and if you make mistakes it is difficult.

"I'm a little bit disappointed because everyone was expecting another game like we played against Liverpool or Man City and this is my biggest concern, we didn't go to the pitch in the way we usually go

The players maybe thought it was going to be easier because we played very well against Manchester City two or three weeks ago."