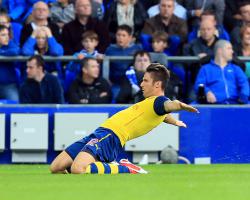 Two goals in two minutes from Olivier Giroud gave Arsenal a 2-0 home victory over second-tier Middlesbrough on Sunday that sent the FA Cup holders into the quarter-finals.

An upset never looked likely, as Arsene Wenger's side prevented Championship high-fliers Middlesbrough from pulling off a repeat of their victory at Manchester City in the previous round.

Instead, Arsenal were totally dominant at the Emirates Stadium, and even offered some sparks of magic; not least from Santi Cazorla, who emphasised the huge gulf in quality between the sides.

It was easy to see in the opening stages that Middlesbrough coach Aitor Karanka had once been Jose Mourinho's assistant, as the visitors displayed a lot of the defensive solidity characteristic of the Portuguese's sides.

They packed the area around their own box and, although Arsenal were in full control, they initially struggled to create much beyond long-range shots.

Cazorla had a free-kick palmed away by goalkeeper Tomas Mejias and Giroud forced a similar save from the goalkeeper with a curled effort from distance.

It seemed like Arsenal were going to have come up with something a little more creative to actually open Middlesbrough up, but Cazorla provided it.

On 27 minutes, with all space in front of him again closed off, the Spaniard played a divine reverse pass out wide that opened up the entire box.

Kieran Gibbs ran on and slotted the ball through for Giroud, who stabbed it past Mejias for the first goal.

That seemed to set Arsenal off, as it was 2-0 almost immediately.

The home side forced a corner that the fit-again Alexis Sanchez took very quickly, with Giroud seemingly the only other player on the pitch alert to it.

With Middlesbrough's defenders caught on their heels, the France international darted in front of Mejias and neatly volleyed in from close range.

Middlesbrough were by then forced to step out a little more, but that only made Arsenal look livelier.

They were suddenly finding so much more space, and Sanchez was unlucky not to make it 3-0 after rounding Mejias

The best Middlesbrough mustered in response before half-time was an Albert Adomah pot-shot, but Wojciech Szczesny easily held it.

The goalkeeper was back in the team for the first time since the fourth-round win over Brighton and Hove Albion, having been dropped, but could not have wished for an easier return.

A moment after half-time summed up Middlesbrough's performance

They finally got a corner, only to take it short and lose the ball, allowing Arsenal to create a chance on the counter-attack.

The home side were by then creating openings at will, with Danny Welbeck, Mesut Ozil and Gibbs all going close.

The only thing missing from a near-complete display was a Sanchez goal, and that almost arrived on 65 minutes, only for Mejias to supremely touch his diving header away.

The goalkeeper's performance was perhaps the one plus for Karanka, as he stood up strongly.

The Middlesbrough manager's attacking changes did initially have some effect, as he brought on Adam Reach and Jelle Vossen for Chelsea loanee Patrick Bamford and Lee Tomlin.

Reach looked to have set himself up for a run on goal on the hour, only for Arsenal's new signing Gabriel to body-check him, for which the Brazilian centre-back was booked.

The resulting free-kick had none of that power, as it was hit tamely into the wall