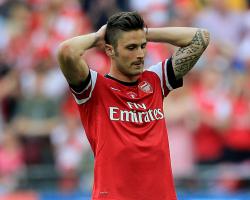 The Gunners spent 128 days at the Premier League summit this season but they lost top spot with a 5-1 hammering at Anfield in early February and never regained it.

Arsene Wenger's side eventually finished fourth, although they went on to win the FA Cup, and Giroud believes a number of issues contributed to their league campaign unravelling.

"We were on top for a good half of the season and then we cracked," he told French newspaper Midi-Libre.

"I believe we lacked maturity and that we had a lot of injuries at an important time.

"Above all we weren't able to adapt to the big teams.

"We have to show progress in these matches, to maybe play less football, but it's difficult because it's our playing philosophy."

Giroud finished his second season in England with 16 league goals and feels comfortable enough to already be looking to extend his current deal with the Gunners.

"I feel at ease in the league

I hope to do even better," he added.

"I'm progressing from year to year, in the image of the team that plays a polished game.

"I still have two years on my contract but we are in negotiations to extend it."