Giroud sorry for moment of madness 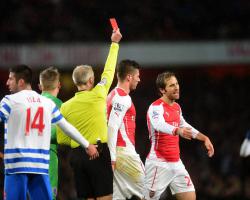 Giroud was dismissed early in the second half at the Emirates Stadium for head-butting Nedum Onuoha right in front of referee Martin Atkinson and Wenger gave his forward an icy glare as he stalked off the pitch.

Arsenal, who had opened the scoring through Alexis Sanchez, added a second through Tomas Rosicky but faced a nervy finish when Charlie Austin pulled one back from the penalty spot.

"It was a deserved red card

Madness is a strong word - he didn't kill him

But he touched him and should not have done it

He should have been in control," said Wenger, who confirmed that Giroud has apologised.

"Olivier Giroud knows he made a mistake and I know him well enough to think that he will not do it again.

Usually he's a guy who's in control of his response."

"Honestly, you never need that

In my job you sometimes have to deal with the strengths and sometimes the mistakes of people," Wenger said.

Wenger celebrated his 400th Premier League victory and 600th as Arsenal manager, but was almost denied the milestones when QPR poured forward in the closing minutes.

"We were nervous and the opponent pushed forward

Our game is about psychology and the mental aspect

In the final part of the game when the result is not settled, it's always very important," Wenger said.

The next 400 will be much more difficult!"

Sanchez missed an early penalty, awarded after he had been tripped by Armand Traore, and QPR's defending was feeble throughout.

"It was a blatant penalty

It was a penalty

He got dragged down," Redknapp said.

For them to score was the worst possible thing

To go two down was a massive blow.

"You have to come away with something

We've got two home games now (against Crystal Palace and Swansea) and we have to pick up some points in those."