Giroud- Well prove we can win it 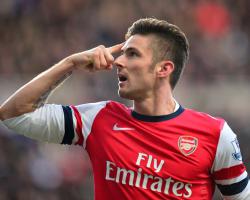 The Gunners head to Liverpool on Saturday lunchtime and then host Manchester United next Wednesday night, before Brendan Rodgers' side come back to the Emirates Stadium in an FA Cup fifth-round tie on February 16.

That is followed by a Champions League visit to north London by holders Bayern Munich.

Despite many pundits confidently predicting Arsene Wenger's squad would come off the rails sooner rather than later, Arsenal remain top of the Barclays Premier League, a point ahead of Manchester City who were beaten 1-0 at home by Chelsea on Monday night.

Giroud is in no doubt his men have what it takes to last the distance through to May.

"We have to show people that we want to answer (our critics) on the pitch and nothing more," the France international told Arsenal Player.

"That is the most important (thing) for us, the reality of the pitch

After that, if people don't think we can finish first it is not my problem, but I know we have a good chance to win the league."

Gunners boss Wenger firmly believes his squad possess the character needed to pull through such a demanding schedule which could well shape the final outcome of their season.

"It is a good moment for us to win a big game because we have a tough predicted month," Wenger said.

"At the moment I think we are on a good run and the best way is to continue that to keep the confidence level high and of course to stay in a strong position in the Premier League."

Chelsea manager Jose Mourinho may have talked down his own side's championship ambitions despite their dogged win at Manchester City - claiming they were the "little horse" left in the title race - but Wenger insists no definitive conclusions can be reached for several weeks yet, given how tight it is as the summit.

"I said you have to wait until the end of February to have the exact idea of who will fight for the Premier League," Wenger added.

"It is an important month for many teams and maybe you will need a bit of patience."

Liverpool head into the game some eight points off the pace, but Wenger will take nothing for granted at Anfield where he knows Arsenal must be on their guard to shackle the threat of a certain Luis Suarez and strike partner Daniel Sturridge, as they did when the sides met at the Emirates Stadium back in November.

"They are a team that is fluent going forward and can put you under pressure," Wenger said.

"Liverpool certainly now have more players who can make a difference, so what you want on our side is a strong defensive performance."