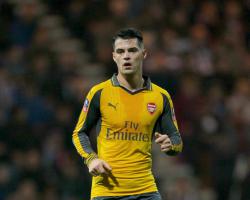 The 24-year-old begins a four-match ban this weekend after being dismissed during the 2-1 victory over Burnley last Sunday.

Xhaka, who was signed for ÃÂ£30million from German side Borussia Monchengladbach in the summer, was praised by Wenger for his commitment and dedication but the Frenchman believes his tackling technique is a fundamental problem and thinks the best course of action is to simply stop doing it.

"(I have concerns) more about his technique," Wenger said on Thursday.

He doesn't master well the technique of tackling.

"I would rather encourage him not to tackle, to stay on his feet and that's the best way to deal with it

Tackling is a technique that you learn at a young age.

"You can improve it but when you are face-to-face with somebody, it's better you stay up."

The player now has nine red cards for club and country since 2014, and things got worse for him when he was spoken to by the police over an allegation of racial abuse at Heathrow Airport on Monday

The 24-year-old denies any wrongdoing and was not arrested

He visited a local police station after the alleged incident was reported.

A statement related to the incident was released by the Metropolitan Police on Tuesday, which read: " Police were called at 19:29hrs on Monday, 23 January following an allegation that a member of staff had been racially abused at Heathrow Airport, Terminal Five

"The allegation was made by a third party

Officers attended and spoke with a man in his 20s

He was not arrested

Wenger was adamant that the player had not let Arsenal down, either over the racial abuse allegations or the second red card

"There are two incidents which have been talked about," Wenger said

"One is the sending-off

It was not a dangerous tackle, it was a clumsy tackle

He has to learn from that

I don't think he wanted to injure anybody.

"He has to learn from it

Unfortunately we will lose him for four games in a very important period of the season.

"Hopefully we will get away with it

The other incident, at Heathrow, he denies completely

I have talked with him about it and he completely denies what happened there.

He's had a fantastic attitude since he arrived here on a daily basis.

"Sometimes you don't know how the players will behave on a daily basis but I must say that he has been absolutely marvellous to handle with his commitment, focus, dedication and I've never heard anything bad said about him."