Gunners back into top four with win 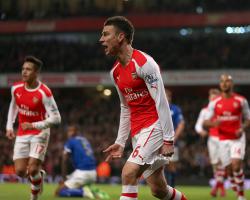 The Gunners, beaten by Tottenham in the north London derby on Saturday, looked to be in control after first-half goals from Laurent Koscielny and Theo Walcott.

However, Croatia forward Andrej Kramaric netted his first Leicester goal after 61 minutes to reduce the deficit, while Arsene Wenger's side survived some late pressure and some five minutes of stoppage time to secure victory which moves them back above Spurs and Manchester United, who play on Wednesday.

The result was harsh on Nigel Pearson's side, showing plenty of industry for their under-fire manager, who came down from the director's box to orchestrate the second-half recovery.

Leicester, winless in 16 games against Arsenal since November 1994, had enjoyed a promising start as a deflected effort from Riyad Mahrez flew across the Arsenal six-yard box.

There were alarm bells in the home penalty area again after 11 minutes when the Algerian forward burst clear down the right and fired a low shot through the legs of David Ospina, which flew just wide of the far post.

In the 15th minute, Walcott latched onto a through pass from Mesut Ozil, but Foxes goalkeeper Mark Schwarzer was out quickly to make a smart block with his chest.

Ozil, fit again following nearly three months out with a knee injury, played a neat exchange with Sanchez at the edge of the Leicester box, before stepping inside and sending a toe-poke shot towards the bottom right corner, which Schwarzer palmed away at full stretch.

From the resulting corner, Arsenal took the lead after 27 minutes.

Ozil floated the ball towards the near post, where Koscielny got clear of his marker to fire past the keeper from point-blank range.

Leicester looked to regroup, and Mahrez curled a 20-yard effort wide after more patient build up from the Foxes, who had lost their last three Premier League matches.

Arsenal, though, doubled their lead in the 41st minute.

Ozil was given space some 25 yards out and drilled in a left-foot shot which Schwarzer could only parry.

The ball dropped to Walcott, who dispatched it on the volley back into the bottom left corner for a third goal in four games.

Arsenal felt they should have been awarded a penalty at the start of the second half when the ball clearly struck Leicester defender Danny Simpson on the arm from Sanchez's pass, but referee Mike Jones was not convinced.

Leicester continued to look for a way back into the match, with an angled pass from Simpson picking out Matty James in the right side of the penalty area, but the midfielder could not bring the ball under control.

On the hour as former Arsenal defender Matthew Upson limped off, replaced by Marcin Wasilewski, Ospina got down quickly to beat away a low drive by Kramaric, whose cross was then headed over by Per Mertesacker

Arsenal were punished for some slack defending from the corner as it bounced around a crowded penalty area before being buried into the bottom left corner by Kramaric for his first Leicester goal since a ÃÂ£9million January move from Rijeka.

The Gunners looked to reassert themselves, as Santi Cazorla tested Schwarzer with an angled drive before, after 68 minutes, Sanchez was replaced by Olivier Giroud.

Mahrez curled a 20-yard effort inches wide before Leicester broke quickly again in the 71st minute, with Ospina just getting his fingers to a chip from Kramaric.

Arsenal had to replace substitute Aaron Ramsey, who had not been on the pitch for more than 10 minutes, when the Wales midfielder pulled up with what looked like a hamstring problem

Leicester refused to lie down, but this time, there was to be no late capitulation from the Gunners, who host Middlesbrough in the FA Cup fifth round on Sunday.