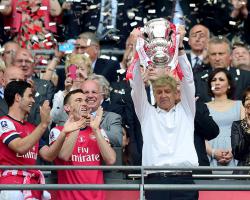 Press Association Sport understands the formal announcement of Wenger's contract extension is imminent, with the 64-year-old soon set to head off to the World Cup in his role as a pundit for French television.

Keswick said: "I hope he will continue and there will be successes to come in the very near future

We have added one trophy, and we want more.

"Anybody who does a job like that, for as long as he has, deserves every success that comes his way

He did it and I have never seen a man more delighted," Keswick added on the club's official website.

Wenger has been promised up to a ?100million transfer budget with which to bolster the squad in an attempt to bridge the seven-point gap on Barclays Premier League champions Manchester City.

Real Sociedad winger Antoine Griezmann is one reported target, with Carlos Vela potentially involved as Arsenal have a buy-back clause on the Mexican forward which could be used as leverage.

The Ivory Coast defender, 21, told Eurosport France: "It is true that I would be a bit disappointed to stay in Toulouse after a season like this one

I want to try something else.

"I have never prioritised a club in England as even the promoted clubs are respectable, so I would take the opportunity for the one that will show the most interest in me, that will give me the most game time.

"After that, you can't really say no to Arsenal.

"It is a club with history, with a French manager, who has welcomed many France players

Plus, Arsenal are always thereabouts when it comes to trophies and a club that plays in the Champions League."

The future of goalkeeper Lukasz Fabianski, who played at Wembley against Hull, is also unclear as he too could depart on a free transfer, with Newcastle and Swansea both touted as possible destinations.