Gunners close in on Debuchy 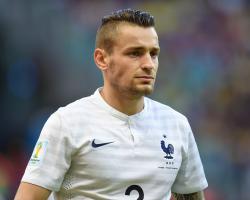 Following the arrival of Holland full-back Daryl Janmaat from Feyenoord, the Magpies are now happy to finalise the departure of Debuchy, in what is expected to be a Â£10million deal.

The 28-year-old, who was part of the French World Cup squad which reached the quarter-finals in Brazil, will present ready-made Barclays Premier League cover for Bacary Sagna, who earlier this summer left Arsenal to join Manchester City on a free transfer.

Manager Arsene Wenger has now returned from his media duties in Brazil as the Gunners step up pre-season preparations ahead of a trip to New York at the end of the month.

By then, Arsenal could well have further strengthened the squad following on from the Â£30million capture of Chile forward Alexis Sanchez from Barcelona.

German international midfielder Sami Khedira is one reported target, with sources in Spain claiming Real Madrid are ready to sell for around Â£25million, although the World Cup winner's personal terms could prove a sticking point on any potential such deal with Arsenal.

Borussia Dortmund's Lars Bender, who missed the World Cup through injury, is another player Wenger has long admired.

Arsenal also need a goalkeeper, with Colombian goalkeeper David Ospina, of Nice, said to be on the club's radar.

Egypt international defender Ahmed Fathi is having a trial at Arsenal this week, while Atletico Madrid's 20-year-old right-back Javi Manquillo is another a potential new recruit.

The Gunners will take a select side to Boreham Wood on Saturday, so those who were not involved at the World Cup could get a first run-out.

Midfielder Aaron Ramsey was player of the season last campaign, recovering from injury to help Arsenal win the FA Cup at Wembley.

The Wales international is determined to build on those achievements.

Hopefully I can keep improving and get better and better

That's my target now - just to improve on my game and keep on building every season," Ramsey said on www.arsenal.com.

I've had a bit of everything so it was nice to have a good season, score the number of goals that I did and be recognised a lot more.

"I've always believed in myself and what I can do, and I think a lot of people realised that last year and that's what I'm more happy about."

Following their trip to the United States, Arsenal host the Emirates Cup on August 2/3, which is likely to present a debut for Sanchez as well as a chance for World Cup winners Per Mertesacker, Lukas Podolski and Mesut Ozil to return following a well-deserved three-week break.