Gunners close in on Debuchy deal 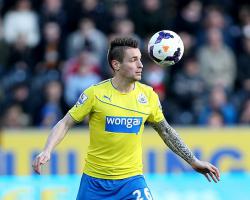 The World Cup may still be in full swing out in Brazil, where manager Arsene Wenger is working for French TV while German trio Per Mertesacker, Mesut Ozil and Lukas Podolski are preparing for a semi-final showdown against the hosts in Belo Horizonte, but Gunners assistant boss Steve Bould and the backroom staff have been busy easing some of the players in for medical tests at their Hertfordshire base.

Arsenal, though, are keen to bolster the squad as quickly as possible, having stepped up their pursuit of Debuchy from Newcastle once France went out at the quarter-finals last weekend.

The formalities of an Â£8million deal for the 28-year-old are understood to be close to completion as Wenger targets an immediate replacement for Bacary Sagna, who left on a free transfer to Manchester City.

The transfer of Chile forward Alexis Sanchez, meanwhile, may take longer to push through.

Although the player is reported to be keen on a move to London and Arsenal ready to meet Barcelona's Â£30million-plus valuation, it remains to be seen whether the proposed transfer of Luis Suarez to the Nou Camp from Liverpool will have any bearing.

Juventus is also another possible destination for Sanchez, who played in Italy at Udinese before moving to Spain.

Speaking at the unveiling of new goalkeeper Claudio Bravo, Barcelona sporting director Andoni Zubizarreta insisted there had been no fresh developments on the transfer.

When asked directly about Sanchez, he said: "There is nothing new to report

We will announce deals when they are done

Right now, we have two Chileans in our squad."

Arsenal are also on the look out for a defensive midfielder, with Wenger said to have re-ignited interest in Lars Bender, having been close to a deal to bring in the German from Bayer Leverkusen last summer.

Fiorentina's Colombia international Juan Cuadrado, Southampton's France midfielder Morgan Schneiderlin, Ajax winger Ricardo Kishna and German international Sami Khedira at Real Madrid are others on what would appear to be a somewhat crowded radar for the Arsenal manager.

Gunners captain Thomas Vermaelen, one of the players set for a delayed return to Colney, admits he is unsure of his future given he is no longer first-choice, with Manchester United a possible destination.

Arsenal are said to be scouting Â£8million-valued Greek defender Kostas Manolas from Olympiacos as cover.

It is expected those players involved in the later stages of the World Cup will not be required to travel, but England duo Jack Wilshere and Alex Oxlade-Chamberlain could well be on the plane if match fit