Gunners could pass up Fabregas deal 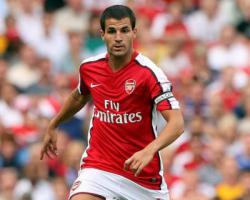 Press Association Sport understands while there remains a strong emotional bond with the Spain midfielder, who left for Barcelona in a ?35million deal three years ago, manager Arsene Wenger may yet decide against exercising first option to bring the 27-year-old back to the Emirates Stadium.

Spain international Fabregas is said to be surplus to requirements at the Nou Camp this summer, and as part of the deal which saw him return to his boyhood club in 2011, Arsenal would head any potential suitors.

However, the emergence of the likes of England duo Jack Wilshere and Alex Oxlade-Chamberlain, along with Santi Cazorla, veteran Czech Tomas Rosicky, rejuvenated Aaron Ramsey and club-record signing Mesut Ozil, the Gunners could consider they already have enough cover in Fabregas' preferred position at the heartbeat of the side.

Should Arsenal not decide to take up their option, then Fabregas - said to prefer a return to the club he joined as a raw 16-year-old - would likely trigger renewed interest from both Chelsea and Manchester United, who tried to take him to Old Trafford last summer.

Wenger will, however, strengthen Arsenal's FA Cup-winning squad in an attempt to last the distance in the Premier League next season.

Chief executive Ivan Gazidis told a supporters' group the club were "deep in conversations already" with their chief targets.

A right-back will be needed to replace contract-rebel Bacary Sagna, who seems destined for a lucrative free-transfer switch to Manchester City having turned down Arsenal's improved offers.

Toulouse right-back Serge Aurier had been touted as a potential replacement, but Press Association Sport understands the Ivory Coast defender is not high on Wenger's wanted list.

Goalkeeping cover is also needed after Lukasz Fabianski left for Swansea, the Pole's last appearance having been in the FA Cup final win over Hull at Wembley.

Norwich's John Ruddy, who missed out on England's World Cup squad, is a reported target following the Norfolk club's relegation.

While those two acquisitions would simply plug the gaps filled by player departures, Arsenal are also determined to land a proven forward to support France international Olivier Giroud.

Wenger is an admirer of Real Madrid's Spain Under-21 forward Alvaro Morata, while a big-money move for Inter Milan's ex-Manchester City frontman Mario Balotelli could yet materialise.

The Arsenal manager, however, said at the end of last season he expected most of the transfer deals to be pushed through after the World Cup, where he will be working as a pundit for French television.

Arsenal have several players hoping for success in Brazil including d efender Per Mertesacker, who believes Germany are long-overdue a title win

He said on Arsenal Player: "We have been consistent with second and third places over the last few tournaments.

"The expectation is huge because if you always get second or third place, you want to get to the top.

"We have always been well placed over the last 10 years, but the team spirit can take us one step further to the title.

"We have to go game by game and give better performances, and also to build up the team spirit that is necessary to get something out of the tournament."

Speaking at a Yahoo event and reported by Belgium's RTL, Mourinho said: "I'm interested to look at his situation.

I think that is pretty clear.

"After that, whether he signs for us or someone else is not a question for today, tomorrow or before the World Cup.

"We are interested to see how the situation evolves."