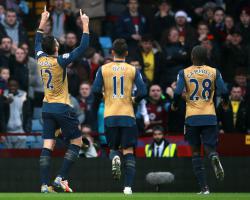 Olivier Giroud's penalty and Aaron Ramsey's tap in moved them to the summit, a point ahead of Manchester City and Leicester, following a 2-0 win.

The Foxes could regain top spot if they beat Chelsea on Monday but with Manchester United losing at Bournemouth and City struggling to find a rhythm the Gunners have the title advantage.

In contrast, defeat left hosts Villa marooned eight points from safety at the bottom of the table with manager Remi Garde, who won the title with Arsenal in 1998, facing an impossible job.

Villa, one of just seven ever-present teams in the Premier League, look all but down even with half the season remaining.

The returning Theo Walcott, in for Alex Oxlade-Chamberlain, outpaced Alan Hutton on the right and tangled with the Scotland international in the area.

It took an age for referee Kevin Friend to point to the spot but when he did Giroud sent Brad Guzan the wrong way for his 50th league goal for Arsenal.

Villa's enthusiastic approach counted for nothing and Rudy Gestede nodded off his own line after Giroud's header caught Guzan in no man's land.

Leandro Bacuna ballooned over after Petr Cech flapped at a cross but Arsenal were comfortable and toyed with their hosts.

It was a training game for the Gunners as they passed in front of Villa and waited for their time to strike again, which came in the 38th minute.

Ramsey's strong challenge on Idrissa Gana set the visitors up on the counter attack and Walcott fed Mesut Ozil to dummy and race clean through.

He then squared to Wales star Ramsey, who had made up the ground, to tap past the helpless Guzan.

It was simple but clinical from the Gunners and left Villa floundering but the hosts at least started the second half with renewed vigour.

Scott Sinclair then wasted a golden chance on 57 minutes when he planted an unmarked header over from six yards.

Arsenal had eased off from their first half dominance to give Villa hope and Gana drilled inches over with 19 minutes left.

Villa allowed Ozil too much time on the right and when Ramsey held up his cross Oxlade-Chamberlain, on for Walcott, saw his effort saved by Guzan before the keeper claimed Hector Bellerin's injury-time header.

It was the Gunners' only serious threat of the half but the damage had been done early with Arsenal left to ponder their title challenge and Villa left to fret over their top flight future.

"Two great results this week! Thanks to all the travelling fans

#COYG" Arsenal defender Hector Bellerin's view after he played in the 2-0 win over Aston Villa.

Fresh from being drawn against England at Euro 2016 the Wales midfielder demonstrated his quality at Villa Park.

His tackle deep in his own half set up Arsenal's second - which he scored - to seal the points against Villa and send Arsenal top.

Ramsey will have more testing afternoons but he was combative and skilful in the heart of the Gunners' midfield, adding a goal to an all-action performance.

MOMENT OF THE MATCH:

Aaron Ramsey started and finished the move which gave the Gunners breathing space just before the break.

The midfielder's strong tackle on Idrissa Gana had Villa complaining but they were then carved apart as Olivier Giroud, Theo Walcott and then Mesut Ozil dismantled the hosts.

Ozil's dummy as he ran onto Walcott's pass sold the Villa defence and he was unselfish enough to pass for Ramsey to tap in.

MOAN OF THE MATCH:

Villa were incensed with the award of Arsenal's early penalty which referee Kevin Friend took his time to award.

Alan Hutton was guilty of giving the referee a decision to make after he tangled with Theo Walcott in the area.

At first glance it looked a clear cut call for Friend but replays suggested Villa can rightfully feel aggrieved about the decision which put them on the back foot inside the first 10 minutes.

VIEW FROM THE BENCH:

Arsenal motored to the top of the Barclays Premier League and their perfect first half display would have pleased Arsene Wenger, although he would have been less satisfied with how they took their foot off the gas after the break.

Wenger admitted pre-game it was a risk for his former midfielder Remi Garde to take the Villa job in November and Garde is now staring down the barrel of the Championship - even in December.

Villa will be bottom at Christmas and while Garde would have been pleased with their effort, he needs to be a magician to keep them up.