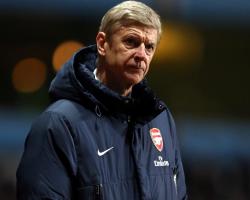 The Gunners host Liverpool in the FA Cup fifth round on Sunday afternoon and then must regroup for the visit of Champions League holders Bayern Munich in the first leg of their last-16 clash just over 72 hours later.

Last season, Wenger's men were found wanting in such a crunch period as they first crashed out of the FA Cup at home to Championship side Blackburn and were then outclassed 3-1 by Bundesliga giants Bayern, which rendered their second-leg victory in Germany a hollow one to exit on away goals.

This time around, the Gunners boss claims there can be a different outcome.

"It is like a guy who goes to the Olympic Games after four years, he prepares for one race which decides his success, and that is it," said Wenger.

"I think we have produced quality until now and we have just to continue to focus on that and expect the quality of our game will decide the results."

Wenger insists his side will be stronger for their disappointments of recent seasons in the continuing quest for a first trophy since 2005.

"You learn from failure that is for sure, especially intelligent people," Wenger said.

"Some stupid (people) never (learn), the definition of stupidity is they make always the same mistakes."

Wenger does not intend to switch focus to tackling Bayern until the Liverpool tie is out of the way, although he admitted there could be a few selection changes for the FA Cup game as Arsenal look to avenge last weekend's 5-1 thrashing at Anfield in the Barclays Premier League.