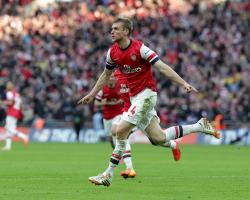 The Gunners head into the tie on the back of a superb run of form, which has seen them win 16 from 18 matches in all competitions and up into second place in the Barclays Premier League.

The atmosphere around the club is certainly a world way from the tense finale to the 2013/2014 campaign, when Arsenal were under extreme pressure in the quest to finally end a near decade wait for silverware as well as finish in the top four of the Barclays Premier League once again, not to mention the uncertainty around the future of manager Arsene Wenger.

Those ambitions were within eight minutes of being shattered when trailing 1-0 to Wigan in their semi-final 12 months ago, before Mertesacker made amends for giving away an earlier penalty when heading home a late equaliser to force extra-time and a nerve-shredding penalty shoot-out victory that in turn set up a final against Hull, which itself proved just as dramatic as Arsenal came from 2-0 down to lift the trophy.

"It is a good warning to all of us

You need to be focused 100% Reading, so it is going to be a tough one for us," said the German, who will again lead the team out at Wembley with captain Mikel Arteta still not fit.

"We suffered a bit last season on that occasion with that pressure, but it was a great experience and hopefully we can manage that a bit better.

"We are on a good level of confidence, but there will be pressure on us because we are super favourites and can we handle that during the game?"

Mertesacker added: "It is going to be Reading's biggest game of the season, so to mentally prepare for that is going to be difficult, not just to match their physicality and mental strength, but to do more, to be on the ball from the start, to show them respect, but no fear for the pressure.

"The winning streak helps us a bit, but this competition is completely different.

"It is the best competition I have ever played in because so many big teams struggle, but I don't want to struggle

I want to repeat the success (of 2014), so let's make sure that we are on the same level and do more than our opponent.

We have the chance to do it because we did well before and that is something I want to build on."

Mertesacker believes the squad have it within themselves to sustain a challenge for honours in the coming seasons.

The German continued: "To go on or to be consistent - that is a tough target, but we push ourselves.

"We want to be able to defend a title and be able to compete at the top which makes us at the moment a good team.

"We haven't shown that consistently this season because all of a sudden we lost one game [in the Champions League last 16 first leg to Monaco] and in a cup competition you cannot afford that.

"Even in the Premier League, if you lose four games, you cannot win the title, so that is something we really try to push ourselves to the next level."

The bedrock of Arsenal's resurgence has been the return to fitness of key men, which has left the likes of Theo Walcott, Danny Welbeck and Kieran Gibbs all looking on from the bench

Jack Wilshere could be another in contention this weekend, having recovered from minor ankle surgery.

Mertesacker believes such strength in depth can only be a positive for the squad's development.

"It is weird, but it is really good, the competition we have got at the moment

It is really something that lifts everyone at the club," he said.

"Obviously there are going to be a few disappointing situations for players, but we have to respect the manager's decision and not to let anyone down, if someone is not in the squad."