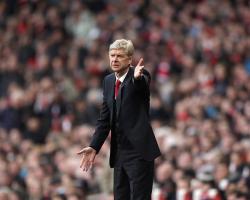 Sunday's 2-1 FA Cup fifth-round win at the Emirates Stadium was a welcome triumph for the north London side after a trying week following a 5-1 Barclays Premier League mauling on Merseyside and an attack on Wenger from Chelsea boss Jose Mourinho.

"It was vital for us to respond to the disappointing performance we had against Liverpool," Wenger said.

"I'm very pleased with the intensity of our commitment, our response, our determination.

"You could feel there was a clinical desire in my team to take every opportunity to kill them."

Goals from Alex Oxlade-Chamberlain and Lukas Podolski earned Arsenal victory, with Steven Gerrard converting a second-half penalty for Liverpool, who were denied another spot-kick when Luis Suarez was fouled for a second time.

The win means Arsenal play Everton in the sixth round and remain in contention to end their eight-year trophy drought in three competitions.

Wenger was relieved to see his side overcome Liverpool despite the visitors threatening to tear their hosts apart for a second time in eight days.

Twice Daniel Sturridge was unable to score in the opening five minutes and the chance to shoot for an equaliser from 12 yards was denied when referee Howard Webb chose not to award the Reds a penalty when Oxlade-Chamberlain fouled Suarez.

Liverpool boss Brendan Rodgers was bemused by the decision and does not feel his striker's reputation for going to ground easily should have impacted on Webb's decision-making.

"If it is a penalty he should have it, irrespective of what his reputation is," Rodgers said

"It looks a blatant penalty."

Wenger made seven changes to play Liverpool, but expects Jack Wilshere (stiff back), Santi Cazorla (ill), Kieran Gibbs (muscular problem), Bacary Sagna (tired) and Olivier Giroud (tired) to be back in contention for the starting XI against Bayern.