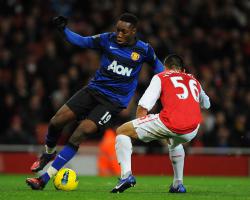 The 23-year-old, who is currently with Roy Hodgson's national squad ahead of fixtures against Norway and Switzerland, has signed a long-term deal at the Emirates Stadium to become Arsene Wenger's fifth summer signing - with the deal announced almost two hours after the initial transfer deadline had passed.

He leaves United after coming through the ranks at Old Trafford - developing his craft with loan spells at Preston and Sunderland - but new Red Devils' boss Louis van Gaal has allowed the player to leave in search of regular first-team football.

With Arsenal currently missing crocked duo Olivier Giroud and Theo Walcott, Welbeck is likely to take on the mantle of playing in a central attacking role for Wenger - with a home game against Manchester City a potential debut for the striker.

Welbeck made his United debut in 2008 and went on to make 92 league appearances for his home-town club - scoring 20 goals.

When Ferguson retired and was replaced by David Moyes, Welbeck scored a brace in Moyes' first league game - a 4-1 win at Swansea.

But the local lad was never able to hold down a regular first-team place at United, especially in his favoured main striker role, and has moved to FA Cup holders Arsenal - who completed the deal despite Wenger being in Rome on Monday for a charity football event.

There was believed to be serious interest from the Gunners' north London rivals Tottenham - but they only wanted to take Welbeck on loan with the lure of Champions League football also a likely deciding factor for the player.

He joins fellow forward Javier Hernandez in leaving Old Trafford and the Red Devils tweeted their best wishes to their former man.

He becomes the fifth summer addition to Wenger's squad - with Alexis Sanchez, David Opsina, Mathieu Debuchy and Calum Chambers already on board

There were also a couple of outgoings from north London as Ignasi Miguel moved to Norwich, with Ryo Miyaichi signing on loan at FC Twente.