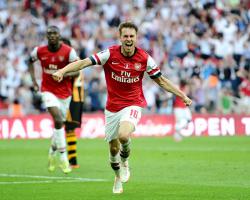 Hull had earlier stunned the Gunners at a sun-baked Wembley as they went 2-0 up inside eight minutes through James Chester and captain Curtis Davies, who both capitalised on some poor defending from balls into the penalty area.

Arsenal, though, rallied and reduced the deficit through a superb 30-yard free-kick from Santi Cazorla.

After several Arsenal penalty claims, notably a pull by Tom Huddlestone on Olivier Giroud, were turned down by referee Lee Probert, the equaliser eventually came on 71 minutes when Laurent Koscielny knocked the ball into the net from a corner before being clattered by Allan McGregor.

The Hull goalkeeper saved well from Giroud as the match went into extra-time when the France forward crashed a header against the crossbar.

However, it was left to Ramsey - who left Wembley in tears as a schoolboy following defeat with Cardiff in the 2008 final against Portsmouth - to complete a remarkable turnaround when he crashed in a loose ball from the edge of the penalty box on 109 minutes which handed Arsene Wenger his first taste of success since 2005, and might just convince him to sign a new contract.

There was, though, almost more high drama as goalkeeper Lukasz Fabianski - in most likely his last appearance for Arsenal - came rushing out of his goal and was beaten to a loose ball down the left by Sone Aluko.

The Hull forward looked to sweep the loose ball into an empty net, but agonisingly for the Tigers fans massed behind the goal, it rolled across the line and wide as Kieran Gibbs chased back.

Few would have predicted a flying start for Hull, but that is what arrived as the Tigers swept into the lead on four minutes.

A corner from the right by Stephen Quinn was floated out to Huddlestone - the usual corner taker.

His scuffed shot bounced into the turf through to Chester, who flicked it back into the bottom left corner just past Fabianski - again preferred to number one Wojciech Szczesny following his heroics in the semi-final shoot-out - as Arsenal had no man on the far post.

Rather than respond, the Gunners suddenly found themselves 2-0 down.

Again it was a delivery into the penalty area which caused problems, this time a ball across from Quinn out on the left.

Alex Bruce's header was deflected onto the post by Fabianski and Davies reacted quickest to smash the ball home from a tight angle - sending the Tigers' fans into delirium once more, with the Arsenal supporters behind Fabianski's goal in stunned silence.

Arsenal assistant manager Steve Bould remonstrated with the assistant referee on the near touchline, claiming a foul in the build-up, but it mattered little.

It was almost 3-0 on 13 minutes when another corner was headed back towards the far corner by Bruce and as the ball looked to be dropping in, this time Gibbs knocked it off the line.

Finally, as the quarter-hour mark passed, Arsenal started to have some possession deep in the Hull half.

On 17 minutes, Cazorla was tripped some 30 yards out by Bruce.

The diminutive Spaniard elected to take the free-kick himself, which he promptly lashed into the top right corner to haul Arsenal back into the final.

Suddenly the Gunners, who won their final five Premier League matches, had renewed belief as Mesut Ozil just failed to connect with a ball through the Hull six-yard box from Lukas Podolski.

Giroud's shot was blocked, before Podolski's bullet follow-up effort was deflected behind.

To their credit Hull, beaten 3-0 at home by Arsenal last month, regrouped and then offered some threat of their own as the Gunners pushed for an equaliser.

Giroud robbed Quinn as he dallied on the edge of the Hull penalty area, but his cutback was hooked clear by Ahmed Elmohamady.

Arsenal continued to ask questions following the restart, with Ozil's clever dragged cross through the six-yard box just too far ahead of Podolski.

Giroud felt he should have been given a penalty when he was tugged back by Huddlestone after getting ahead of the former Spurs man, but referee Lee Probert was not convinced.

With 30 minutes left, Wenger replaced Podolski with Yaya Sanogo, who before kick off had posted a Tweet berating Chelsea manager Jose Mourinho for his "specialist in failure" jibe.

Cazorla was the next Arsenal man to go down in the penalty area, as he turned Davies, but again the officials remained unmoved - much to the anger of Wenger, who came out of his technical area to protest.

On 72 minutes, the Gunners were level.

Sanogo's flick at the near post was blocked behind for a corner, although replays suggested goalkeeper McGregor did not get a touch.

The ball was swung into a crowded six-yard box where it cannoned off two bodies before dropping to Koscielny, who hooked it over the line.

Aluko replaced Quinn to give Hull a much-needed impetus in attack.

Gibbs crashed the ball over the bar after it dropped to him six yards out at the back post following strong work by Sanogo.

Cazorla looked to have been nudged over by David Meyler, but it was no surprise the referee waved play on before McGregor pushed a low angled drive from Giroud behind.

With neither side able to make a breakthrough, the tie went to extra-time.

Ramsey caught Davis in possession to drift over a deep cross, which Giroud looped back onto the bar.

The Wales midfielder, a loser here with Cardiff in 2008, sent a shot into the side netting before Cazorla chipped over.

Wenger sent on Jack Wilshere and Tomas Rosicky, replacing Ozil and Cazorla, for the final 15 minutes, and it was Arsenal who emerged victorious following and instinctive finish from Ramsey, back from a three-month injury lay-off - but not before putting their long-suffering supporters through the mill once more.