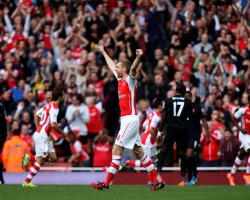 The Gunners looked set for a comfortable afternoon when they took an early lead through a fine finish by Alexis Sanchez against Hull at the Emirates Stadium on Saturday, only to quickly be pegged back by a controversial equaliser from Mohamed Diame, who looked to have pulled Mathieu Flamini in the build-up.

A lapse in concentration at the start of the second half saw Abel Hernandez - drafted into the starting XI following injury to Nikica Jelavic in the warm-up - head the visitors in front.

Arsene Wenger's side, who have been hit by a series of injuries, continued to press as Hull sat deep, but appeared set to be frustrated before Danny Welbeck swept the ball home in the first minute of stoppage time.

Arsenal, who came from 2-0 down to beat Hull in the 2014 FA Cup final, almost snatched victory during the additional six minutes added on by referee Roger East as full-back Kieran Gibbs ghosted in at the far post, but he was denied by a point-blank save from substitute goalkeeper Eldin Jakupovic.

It is now just one victory in their past seven league matches for Arsenal, who were beaten at Chelsea before the international break and find themselves 11 points adrift of the leaders.

Mertesacker, though, feels he has seen enough in recent performances to believe Arsenal can soon build some momentum of their own.

"We have to take the responsibility for that, to have dropped points again, but what really makes me confident is the way that we play at the moment, because no matter what happens, we just carry on and have great potential, that just has to come out much more," said Mertesacker, who captained the team on Sunday with Mikel Arteta on the bench following a calf injury.

"We started really well and put the pressure on them, did a great job to score that opener and were really confident to keep on going like that, but they came back all of a sudden.

"For me, the decision (to disallow the first goal) was clear, everybody had stopped already because he pulled Mathieu Flamini seriously, but the referee thought it would be his strength which had brought him back into the action.

"Afterwards, we kept on going, even after they had scored the second

With the crowd together, we were able to come back and draw that match.

"We nearly scored a third, which would have been more lovely, but at least we have one point and good morale."

Flamini knows Arsenal "have to fix something" if they are to challenge.

"We will try to find a solution for the next games," he said.

"At the moment we are having a bad period, but we didn't lose.

"We came back, so it was great character and very important to recover well with another game on Wednesday (away to Anderlecht in the Champions League)."

Bruce revealed he had opted against starting with Hernandez because of the Uruguayan's travel schedule during the international break, one of several Hull players away.

"We deserved maybe to hang on, but a lot of them have been all over the world this week and we were running on empty," he said.

"The first goal was an individual piece of grappling, maybe we have got a (fortunate) decision, but you don't get many of them at Arsenal so it was a good one to have, but I would rather talk about our second goal because it was an excellent team goal."

Hull will assess Jelavic and also defender Michael Dawson (ankle), but goalkeeper Steve Harper looks set for an extended spell on the sidelines with the torn bicep which forced Bruce to introduce Jakupovic.