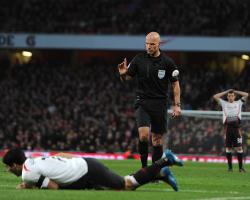 The 2010 World Cup final referee and England's representative for Brazil 2014 awarded Liverpool a spot-kick in the second half but six minutes later did not give another when Alex Oxlade-Chamberlain tripped Luis Suarez.

Had the penalty been awarded and converted, Liverpool would have had the momentum at 2-2, but instead they exited the FA Cup after a 2-1 loss to the Gunners.

Former Premier League official Mark Halsey has advised Webb to give his full attentions to refereeing, rather than allow opportunities that come with his high profile to add to his workload.

Halsey told talkSPORT: "Howard has made an error of judgement

He has not had the best of seasons

He has not been the Howard Webb we all know.

"Perhaps he may need a little rest because he is perhaps doing too much.

"He is not just refereeing football matches, he is doing a lot of work outside of football

He is doing a lot of after-dinner speaking

Everyone wants Howard Webb because he was the World Cup (final) referee (in 2010).

This (refereeing) is his full-time job and he has got to concentrate on this.

He has got to put that on the back-burner and concentrate on what he is being paid for full-time."