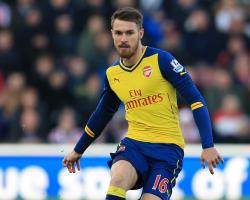 The Wales international netted a superb 30-yard strike in the 4-1 Champions League win over Galatasaray in Istanbul on Tuesday night, but came off at half-time as a precaution.

Speaking after the match in Turkey, Ramsey was confident he would be fit to face Newcastle in the Barclays Premier League on Saturday afternoon.

However, Gunners boss Wenger confirmed on Friday morning the 23-year-old was set for a spell on the sidelines.

He said: " We got the scan last night, I don't know enough to give the extent of his injury."

Arsenal are already without England midfielder Jack Wilshere for several weeks with ankle ligament damage, and it remains to be seen how much of the hectic Christmas schedule Ramsey will now miss

Ramsey's brilliant effort against Galatasaray, when he fired the ball back into the top corner after it was cleared from a corner, was greeted by disbelief from team-mates Yaya Sanogo and Wojciech Szczesny, while also sparking debate over great goals on social media

Wenger admitted in his post-match press conference he had felt Ramsey's decision to shoot from such range was not the best idea, only to be glad to be proved wrong

"He was getting close to it (the form of last season)," said Wenger of the midfielder whose goal in extra-time helped beat Hull to win the 2014 FA Cup final at Wembley.

"It is a great goal and unexpected as well, a surprising one

Even he was surprised that it went so well.

"Aaron has a good finishing technique and he's not frightened to take his chances - and he took it very well."

Defenders Laurent Koscielny (calf), Nacho Monreal (ankle) and Calum Chambers (suspended) are all unavailable for Saturday's late kick-off against in-form Newcastle, so right-back Mathieu Debuchy could be asked to move over to centre-half, the France international having just recovered from three months out with an ankle problem.

Wenger, though, feels if all of his rearguard are fully fit come January, then he will not need to dip into the transfer market for reinforcements in that area of the squad.