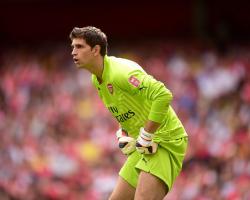 The Gunners headed to Brussels with a depleted squad through injury and suspension, which is likely to see untested 22-year-old Argentinian Emiliano Martinez start in goal backed up by teenager Ryan Huddart, who has been drafted into the squad as cover.

Despite Arsenal's inconsistent start to the new season, which saw them snatch a 2-2 draw against Hull at the Emirates Stadium on Saturday only after a stoppage-time equaliser from Danny Welbeck, the Anderlecht manager insists it would be a grave error to think the English side did not offer a threat.

He said: "Arsenal are playing in the Premier League every week, they are playing big games

We are playing in a smaller competition and we need these type of games to get better.

"We are a very young, talented team and will get better with these type of games.

"But for us it will be a mistake if we are thinking because Arsenal are missing some players, and have not been at their top level in their competition, that they will not be difficult opponents tomorrow

That mistake will not happen here."

Anderlecht had opened their Group D campaign with an impressive 1-1 draw away at Galatasaray.

However, the Belgians were brought back down to earth in their second match when Borussia Dortmund ran out 3-0 winners at Constant Vanden Stock Stadium.

Hasi said: "We had a very good game against Galatasaray and were confident against Dortmund, but we had a difficult game and missed some of our players.

"However, maybe the Dortmund game was a reality check because before the game everyone (in Brussels outside the club) was saying we would win the match 3-0 and we lost 3-0.

"Arsenal have dropped some points in their own championship and are less confident at the moment, but we have to be realistic and focus on ourselves, to keep the ball because we will be playing against a top team in Europe

With regular Gunners' number one Wojciech Szczesny suspended and Colombia international David Ospina suffering a recurrence of a thigh problem which will sideline him for up to three months, Wenger has little choice but to put his faith in the 22-year-old.

Although Martinez has made just two Arsenal appearances - in the Carling Cup during late 2012, which included conceding four goals in the first half of a remarkable 7-5 win at Reading - Wenger believes spending a loan period in the Sky Bet Championship with Sheffield Wednesday last season will have served as good preparation for what awaits at the Constant Vanden Stock Stadium.

"(I am) extremely confident, because he has experience from Sheffield last year and when he played for us, he did very well

I have no special worry about that," said Wenger.

"He is two years older now (than his last Arsenal match), has a good experience

He has grown in stature as well.

"We have to make sure that we make it as comfortable a night as we can for him, and that is by defending well as a team.