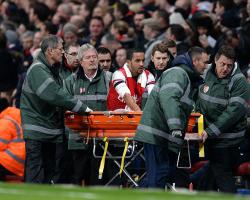 The Arsenal forward is set to be sidelined for six months after tests revealed he would need surgery on the anterior cruciate ligament injury he sustained when making a defensive tackle in the FA Cup third-round win over Tottenham on Saturday.

Walcott, who is expected to undergo an operation next week once the swelling on his left knee has eased, was likely to have played a key role for Hodgson's side in Brazil this summer.

However, the 24-year-old is now facing up to the prospect of missing out on playing in the World Cup for a third time. As a teenager Walcott was a surprise call-up for the 2006 finals in Germany by Sven-Goran Eriksson, but did not get onto the pitch. Then, he was left out of Fabio Capello's squad for South Africa four years ago.

"Having worked with him for two years as England manager I know the character he has, and I know he will come back even stronger from this setback," Hodgson said on thefa.com.

"It is a blow for him personally of course, and for both Arsenal and England.

"I spoke with Theo and just wanted to express my disappointment to him.

"We had quite a lengthy conversation and it is such a shame that we have lost a player of his calibre for the World Cup, he has been incredibly unfortunate and we wish him a speedy recovery."

Walcott has been inundated with words of encouragement from fellow professionals and Arsenal fans alike.

Former England striker Michael Owen suffered an ACL injury during a 2006 World Cup group match against Sweden, and played down suggestions Walcott would not be the same player with such electric pace when he eventually returns to action.

Writing on Twitter, the 34-year-old said: "A ligament the connects 2 bones does not affect speed. Muscles and tendons create speed and power, ligaments create stability. Some players may not return as good as they were for a variety of reasons but rupturing an ACL won't affect speed. My ACL (injury) didn't slow me down. Muscle injuries did as did age."

Walcott was a potent weapon in the Arsenal attack and had netted five goals since returning from a stomach injury.

Forward options for the Barclay Premier League leaders were already depleted, as Nicklas Bendtner will need several weeks to fully recover from his ankle injury while France Under-21 international Yaya Sanogo, a free summer signing, has only now stepped up his rehabilitation from a back problem.

Olivier Giroud missed the Spurs match because of illness after shaking off a minor ankle injury, and remains Arsenal's lead attacker.

While the loss of Walcott is clearly a blow, the emergence of German 18-year-old Serge Gnabry and imminent return to full fitness of Alex Oxlade-Chamberlain at least give Wenger some ready-made cover on the right side.

However, how best to offer direct support to Giroud will now be key for Wenger as Arsenal look to last the distance in the race for honours.

Although the Gunners boss concedes a big-money signing during January is notoriously difficult to push through, Press Association Sport understands American owner Stan Kroenke and the rest of the board would sanction raiding some of the club's substantial cash reserves should the manager identify the right calibre of player.