Arsenal announced the signing of both William Saliba from St Etienne, on a permanent deal, and Real Madrid's Dani Ceballos, on a season-long loan, on Thursday.

Amid much talk of the Gunners' stringent transfer budget, the two transfers are the club's second and third arrivals of the summer, following the arrival of young forward Gabriel Martinelli.

With reports that Arsenal have around £45m to spend on new players, before sales, there has been speculation on how the additions of Saliba and Ceballos will affect the books, with players like Kieran Tierney and Wilfried Zaha still regularly linked.

According to the Sun, Arsenal have stumped up a considerable £15m to secure the services of the Spanish midfielder for just one season.

Since joining Los Blancos from Real Betis in 2017 for around €18m, Ceballos has been largely starved of action, making just 56 appearances across competitions, picking up five goals and two assists in that time. However, the Under-21 Euro winner is highly rated in Madrid and is expected to return to the Santiago Bernabeu next season, with no buyout clause included in his Arsenal deal. 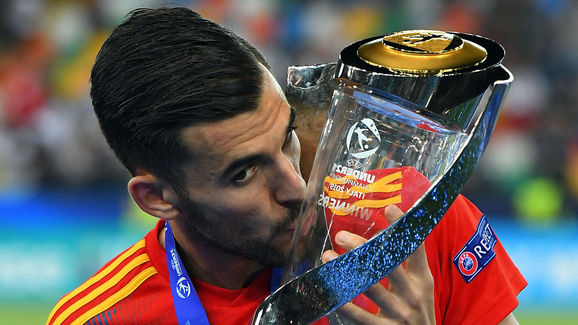 Speaking upon the announcement, Emery admitted: “We’re excited to see Dani join us. He is a talented player with big technical ability, creativity and precision.”

As for the true cost of Saliba, things are slightly more complicated. The 18-year-old defender has signed a five-year deal following negotiations that began in earnest back in February, but has returned to the Ligue 1 side immediately on loan for the 2019/20 season.

However, the fee for the deal has officially remained undisclosed, following initial reports of a sum ​in the region of £27m to £29m.

There were then various reports, which claimed to emanate from L'Equipe, that the ​Gunners would end up paying no more than €30m for the defensive prodigy and that, in even better news, they would be paying just €4m of that sum this season - barely denting their already anaemic budget.

There is no L'Équipe report that claims that Arsenal will only pay €4m of the €30m transfer fee for William Saliba immediately - fake news. Rather, they claim that €4m in bonuses are quasi-guaranteed.

However, according to the reputable Get French Football News on Twitter, this is not the case, with said 'L'Equipe' report fabricated.

In a tweet, GFFN explained: "There is no L'Équipe report that claims that Arsenal will only pay €4m of the €30m transfer fee for William Saliba immediately - fake news. Rather, they claim that €4m in bonuses are quasi-guaranteed."