As the ball hit the Tottenham Hotspur net for the seventh time on Tuesday evening, a deathly silence rang around the stadium. A former Gunner had tucked away his fourth goal of the game against his biggest rivals, and Arsenal fans up and down the country were revelling in Spurs' misery.

Unfortunately for the red side of North London, their joy was bittersweet and filled with regrets of what might have been.

Serge Gnabry has become an international superstar, and at 24 years old, he is playing the best football of his career, but the Germany international's journey to the top of the footballing tree has not been without its doubters and setbacks. 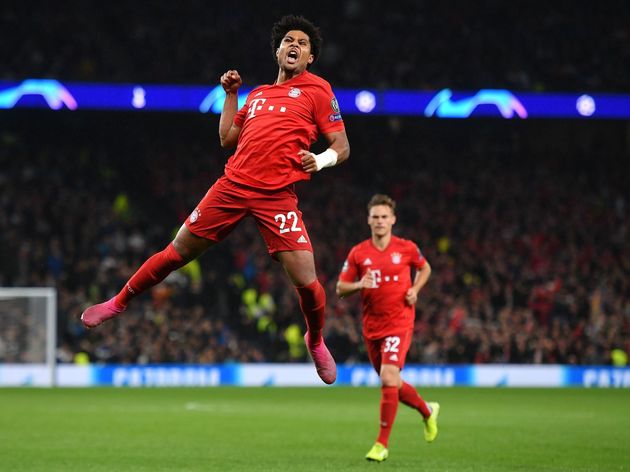 In January 2016, ​Arsenal winger Gnabry was recalled from his loan spell at West Brom, as manager Tony Pulis deemed the German not up to standard, and the youngster headed back to the Emirates with his tail between his legs.

"Serge has come here to play games but he just hasn't been for me, at the moment, at that level to play the games," was Pulis' explanation behind the then-Arsenal man's lack of first-team opportunities.

Fast-forward three and a half years, and Bayern Munich's Gnabry is finally showing the true potential that Arsene Wenger saw within him, tearing apart arch rivals Spurs in the Champions League.

Gnabry joined the Gunners' academy in 2011, and word of a real gem in the ranks

On paper, Gnabry was a dream. The youngster's finishing left a lot to be desired at times, but Gnabry was raw, and his skill and footballing brain were there for all to see. It wasn't long before the winger was thrust into the senior side, and the number 44 grabbed his first Arsenal goal at the start of the 2013/14 season. The first of many, north London hoped.

​Gnabry's career stuttered to a worrying standstill following his excellent first handful of senior appearances, as the starlet went from being nominated for the 2013 Golden Boy award to suffering a serious knee injury which kept him out of action for the entire 2014/15 campaign.

That's where Pulis comes in. The Welshman's damning indictment of his loanee followed the Arsenal forward for a long time, and the notion that Gnabry wasn't cut out for the big-boy Premier League proved his undoing in English football. The tricky winger clearly felt he was good enough to mix it with the best, and moved to Werder Bremen in search of first-team football. It was here where the German star really found his feet, and his raw abilities were nurtured, converting the unpredictable winger into a predatory finisher.

Gnabry's new-found killer instinct earned him 11 league goals in his first season in Germany, and more tellingly, a move to giants Bayern Munich. The 22-year-old was then loaned out to Hoffenheim, where he scored another 10 goals and helped his side to achieve a surprise third-place finish in the Bundesliga.

If Gnabry's development in England was faltering, his growth in Germany was meteoric.

A man once bereft of confidence at West Brom was now scoring 45-yard screamers for Hoffenheim, and his performances convinced Bayern to retain his services for the 2018/19 season.

A stellar year in Munich saw Gnabry finish as the club's second-highest scorer as Der FCB pipped ​Borussia Dortmund to the league title, and the former Arsenal man was now an integral part of the German champions' plans.

Gnabry's scintillating form has not only been reserved for his domestic duties either. Joachim Low sees the Bayern star as the future of Germany's forward line, and his faith has been repaid with nine goals in ten international appearances.

The only two players to have scored four goals against an English team in the Champions League...

The former Arsenal man's career came full circle on Tuesday evening, returning to north London to silence his critics in England, stick the knife in his bitter enemies, and return to Germany as a hero.

The Premier League's impatience led to its viewers missing out on witnessing the development of one of the most exciting talents in world football, and the Bundesliga is now enjoying the fruits of its labour.

Gnabry's young career is a feel-good story of a man doubted by many, who left the limelight to work on his game and prove everybody wrong, and when his time came, proved his true worth.

A heart-warming tale - unless you're an Arsenal or ​Spurs fan, that is.