Unai Emery's side wasted no time in getting a foothold in the match and their pressure eventually paid off when Alex Iwobi'sdeflected volley deceived Huddersfield Towngoalkeeper Ben Hamer, who was left wrong-footed.

Adama Diakhaby was denied his first goal in Huddersfield colours when goalkeeper Bernd Leno scrambled across his goal to maintain his side's two-goal lead. It was the first time the Gunners have picked up three points away from the Emirates since November 25, while the Terriers have now lost seven Premier League home matches on the bounce.

Huddersfield came into the game without finding the back of the net in over eight hours of Premier League football and that run has finally ended, although it was actually an Arsenal player who scored their goal.

Arsenal are the only team in the PL without an away clean sheet this season. Huddersfield have only scored 13 goals in the league this season and scoreless in the last eight and a half hours of football in all competition. They also have the worst home record in the league.

So Huddersfield have gone a long time without scoring a goal... The team you'd most want to play against in that situation would most definitely be Arsenal. We don't do defense.

The Terriers had a great chance to break their duck and gain some confidence in front of goal, even though anything other than a defeat was always unlikely, but new manager STAR MAN - Aaron Mooy's return to Huddersfield's first team didn't quite provide what many fans had hoped against Arsenal this weekend, but the Australia international was the spark for most of their attacking play on Saturday. The 28-year-old was a workhorse in midfield alongside

WORST PLAYER - Ben Hamer had the chance to stake a claim for the starting spot on Saturday, but the former Leicester star failed his test in

The phrase "Arsenal have a clean sheet" is a saying which hasn't been used in about 156 years (or at least it feels like that anyway) and still fans are waiting for their side not to concede on the road this season. 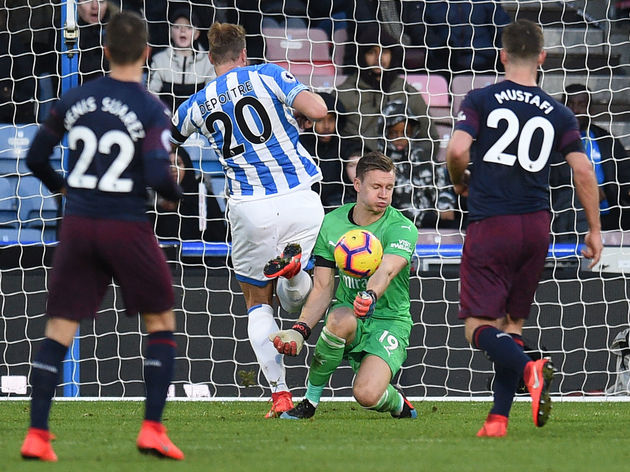 STAR MAN - Alex Iwobi's fine form in recent weeks continued on Saturday as he put in a top display against the Terriers. The Nigerian, as well as Henrikh Mkhitaryan, caused the hosts all sorts of problems playing just off Alexandre Lacazette.

We tried to warn you. Alex Iwobi let loose from the shackles of defensive managers would tear the Premier League apart. Iwobi under Unai Emery should be illegal.

Iwobi and Mkhitaryan have been brilliant today.

Iwobi has been absolutely brilliant

The 22-year-old was at the heart of Arsenal's dangerous counter attacks and his direct style of play kept Huddersfield on the back foot throughout the game. He also scored his first goal for the club since before Christmas.

WORST PLAYER - Mattéo Guendouzi has been a breakout star for Arsenal this season and he's taken no time at all in winning over the fans, but Saturday's performance in West Yorkshire was arguably his worst so far for the Gunners. The 19-year-old was sloppy in possession and made a lot of mistakes that you would expect from a teenager, but that so far Guendouzi hasn't shown signs of during his fledgling Arsenal career.

Fortunately for the France Under-21 international, his below-par performance didn't cost Arsenal any points and their faint hopes to finish inside the top four have been kept alive for at least another week.

Huddersfield travel to Newcastle in two weeks' time with a vital three points up for grabs in the race to stay in the Premier League this season.

Arsenal, following a Europa League doubleheader against BATE Borisov, host Southampton and Bournemouth on the spin before making the short journey to face Tottenham next month.