Imagining a Premier League Hall of Fame Section for 'The Streets'

When you think of worthy candidates for a place in the Premier League's Hall of Fame, the likes of Thierry Henry and Alan Shearer spring to mind. They dominated the division for years with terrifying ease.

But what about those players who only did so for one season? Those players who, temporarily, were the best in the world? History might not remember them, but the streets will never forget.

If the Hall of Fame wanted to add a 'The Streets' section, here are the players who deserve a spot.

In 2013, you didn't want ​Lionel Messi or ​Cristiano Ronaldo on your team. The only man you needed was Michu.

He started the 2012/13 campaign as some unknown randomer on English shores who was worth no more than £2m, but one year and 18 league goals later, he was worth all the money in the world. Finding the perfect strike partnership is every manager's dream, and that's exactly what Alan Pardew did in the second half of the 2011/12 season.

Papiss Cissé only joined ​Newcastle United in January of that campaign, but fired home 13 goals in just 14 games, including that ridiculous volley against ​Chelsea. Add that to Ba's total of 16 goals and you'll begin to understand why these two were perhaps the most terrifying strikers around.

Cole and Yorke? Suárez and Sturridge? Nah, give me Cissé and Ba every day of the week. It's not outlandish to suggest that, in terms of pure talent, former ​Queens Park Rangers star Adel Taarabt is one of the best to ever grace the ​Premier League.

The definition of a baller, Taarabt used to breeze past opponents with some of the best dribbling you've ever seen​. However, between 2011 and 2013, attitude issues and injuries saw him fluctuate between all-time champ and all-time chump.

Harry Redknapp called him fat and things went downhill pretty quickly, but we will always love him. So, remember everything I just said about Taarabt? The same applies to Hatem Ben Arfa, who had all the tools to become a superstar with Newcastle.

He would score long-range worldies, pull off nutmeg after nutmeg and dribble past what felt like the entire population of the UK at times. Go watch his goal against Bolton Wanderers in 2012, I know you want to.

His attitude stopped him from earning a spot in the Hall of Fame, but we all know he should get a mention somewhere. 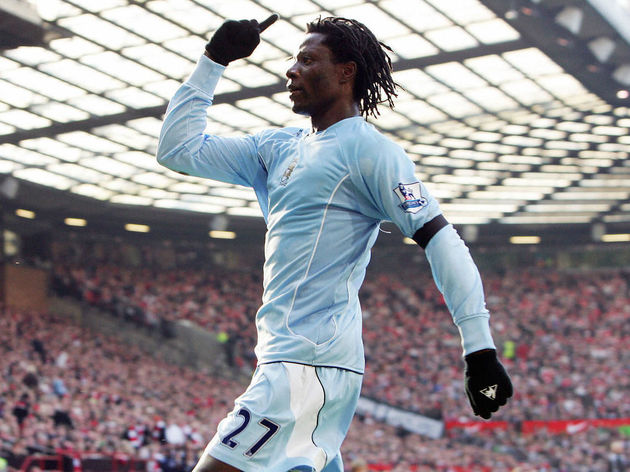 When Benjani moved to Portsmouth in 2006, almost nobody in England had heard of him. By the time he left in 2012, he was an icon.

He banged home 12 goals in the 2007/08 campaign, including a hat trick in a 7-4 win over ​Reading, and the country fell in love with him. ​Manchester City were especially impressed, signing him up later that year.

On his debut, he headed home the winner against ​Manchester United. No biggie. Going from ​Bayern Munich to ​Blackburn Rovers in 2007 was supposed to be a step down for Roque Santa Cruz. So when he racked up 19 goals and seven assists in his first season, it's safe to say fans were a little surprised.

He just couldn't stop scoring, and it's not like he didn't turn up in big games. He netted against all the league's big boys to prove himself as the single-greatest striker around.

He chose to join the early stages of Manchester City's revolution in 2009 and it all fell apart, but his legacy lives on. One year before Santa Cruz's arrival, Blackburn pulled off a huge coup by luring Benni McCarthy over from Porto, and the South African did not disappoint.​

McCarthy ended his debut season with a whopping 18 goals, which was enough to finish second in the league's Golden Boot race ahead of Cristiano Ronaldo and Wayne Rooney. Light work.

Make sure you remember this version of the striker, and not the one who flopped at ​West Ham United. It's been 11 years since Andrey Arshavin put four past Liverpool, and he still hasn't got the statue he deserves. Disgraceful.

He took ​Arsenal by storm in the second half of the 2008/09 campaign, finishing second in their Player of the Season voting despite playing just 12 games. That's the kind of impact we like to see.

His form was pretty good for a few years, but his goals against Liverpool were all he needed to go down in street folklore. Remember those weird four months at the end of 2008 which made Amr Zaki look like the second coming of Pelé?

During those four months, the Wigan Athletic hitman could do no wrong. Everything he touched turned to gold. He managed 10 goals in the first half of the season, including a beauty of an overhead kick against Liverpool, and looked on top of the world.

Then 2009 happened, and Zaki disappeared. But don't worry, we'll always have 2008 to remember.