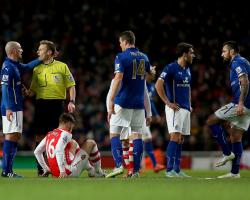 Sanchez, who has only just returned from a two-week lay-off with a hamstring strain, took a knock to his knee in the first half at the Emirates Stadium and had to be replaced in the 68th minute.

Ramsey came on as a substitute in the second half but lasted only nine minutes before going off with what Wenger suspected was a recurrence of a hamstring injury.

"Sanchez got a knock on his knee," Wenger said.

"From the moment he got this knock, he was never really comfortable.

I haven't seen the doctor."

On Ramsey, Wenger continued: "It looks like it (a recurrence of a hamstring injury)

I don't know how bad it is yet.

"Just visually, it didn't look good - when a guy stops straight away and sits down, that's not good news.

"There's a recurrence now of a few muscular injuries and it's difficult - we haven't found out why."

Wenger admitted he was ready to take Sanchez off at half-time but the Chilean insisted he was capable of playing on.

Arsenal were able to overcome their fitness concerns as first-half goals from Laurent Koscielny and Theo Walcott were enough to seal a valuable three points.

Andrej Kramaric created a nervy finish after pulling one back for Leicester, whose second-half display suggested the team remain behind their under-fire manager Nigel Pearson.

"Leicester are fighting not to go down and when you see the way they play football, you are surprised they are bottom of the league and they want to get rid of their manager," Wenger said.

"If they keep quiet, don't panic and stick together they will get out of that.

"For me they are one of the better sides we have played at the bottom of the league."

A number of reports on Sunday suggested Pearson had been sacked but Leicester later confirmed his position, insisting the rumours were "without foundation".

Pearson had been involved in what appeared to be a heated altercation with Crystal Palace midfielder James McArthur on Saturday and it was believed the incident played a part in Leicester considering the manager's future.

"It was jovial, things happen quickly in games," Pearson said.

"I was scythed down and we had a little bit of banter.

"I actually spoke to him last night

He texted me and I was composing a text back to him but I thought, 'I'll just ring him.'

"It was a friendly chat and I think the lad comes out of it with an awful lot of credit in diffusing the situation."

When it was put to him that Leicester's owners had wanted to remove him as manager, Pearson said: "They don't want to get rid of me

"I've had lunch with the owners today and I sat behind them in the first half."

Pearson continued: "They're in London and we stayed in London today

I've spoken to them a few times.

"It was very friendly

I've always had a very good working and personal relationship (with them).

"I don't expect any favours from anyone, I work in a results business and our results haven't been what we would like.

"That brings pressure on people's situations but then you have to find a replacement who will be better and wave a magic wand.

"You have to be careful what you wish for sometimes."

While Arsenal climb back into the top four, defeat leaves Leicester bottom of the table and five points adrift of safety.

"We're getting frustrated with being talked about as unlucky," Pearson said.

"Games like today against a top side are probably a bit of a bonus game.

"Our results against sides around us will be pivotal."