Is anyone paying attention to Arsenal 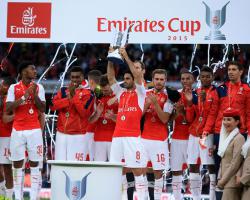 With their second straight FA Cup silverware firming planted in the trophy case, does Arsenal have what it takes to vie for the Premier League title? Looking at their roster of talent it is hard to bet against them

It is not that they made big splashes in the transfer market, though they have upgraded at goalkeeper with the acquisition of Petr Cech from Chelsea.

Then a funny thing happened; WengerÃâs plan of building a great team instead of buying one started to show promise

They were arguably the best team in the Premier League after the New Year.

This team has seemed to grow up together; they have a belief in each other and a belief in their manager

After what they accomplished in the pre-season, IÃâm not so sure

Yes, it was only pre-season, but this team looks to be carrying over the confidence it had at the end of the last

This looks to spell trouble for the top flight teams in the BPL.

There is an American saying that goes, ÃâDonÃât Get HappyÃâ

It means that you shouldn't rest on your accomplishments feeling proud and boastful, but always look forward to improving and staying hungry

If the pre-season is any indication, then Arsenal look downright angry, so now would be a good time for the rest of the league to start paying attention