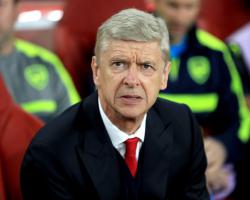 Wenger spoke last week of the "virus" of negativity among fans following last season's home defeat by Swansea - a result he believes sealed the demise of the Gunners' title challenge.

When asked if the virus had passed with Saturday's 3-2 victory over the same opponents, the Frenchman replied that success only comes with embracing the demands of maintaining a title push.

In our game you have to accept that

I believe that humility is to understand that you start again from zero and that you are in a jungle," he said.

"We live in a jungle where everybody wants to eat you and you have to survive by keeping your vigilance.

"That's what competition is about

Every day you have to fight again to survive

The love to win and the competitiveness of the Premier League is very exciting."

Wenger insists talks to extend the contract of Mesut Ozil and Alexis Sanchez, which expire in 2018, are ongoing and denies their futures are tied to his own.

"We are always in touch," said Wenger, whose own deal runs out at the end of the season.

"Mesut Ozil is 28-years-old and in the prime of his career so of course we want him to contribute to the success of this club in the future.

"They are happy at the club and I want them to commit to the club because they believe they are in the right place."

Olivier Giroud could return from his toe injury in Tuesday's EFL Cup match against Reading, while Aaron Ramsey's comeback from a hamstring problem has been pencilled in for Saturday week when Arsenal visit Sunderland.

Danny Welbeck's recovery from a knee problem is progressing ahead of schedule and Wenger revealed he could be available at the turn of the year.

"He's ahead of schedule and could be back in January

After that let's not forget he was already out for a year, so we might have to be patient," Wenger said.

He will start running in two weeks."

Second-placed Arsenal are level on points with Premier League leaders Manchester City and host Middlesbrough on Saturday knowing the early-season gloom that greeted a start of one defeat and a draw has now lifted.

"Before the season everybody would say that it could be a very tight, interesting championship," Wenger said.

"After the first two or three games people felt that City would run away with it, or United would after they won their first three games as well.

From Man City to United to Chelsea, everybody has a chance.

"We are consistent at the moment and I feel there is more to come out from our team.

"The confidence is there because we have been consistent and overall, the desire to do well, the hunger to do well is there

We have to maintain that."