Jack all right after Scholes claim 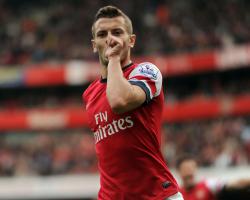 The Gunners academy graduate was widely touted as one of the most exciting midfielders produced by England in years and represented the senior side aged just 18.

However, a string of injuries halted Wilshere's progress, leading former Manchester United midfielder Scholes to recently claim he has failed to reach the "next level".

The ex-England international said that the 22-year-old did not look any better than he did aged 17, which took Wilshere aback somewhat.

"It was a bit strange, out of the blue," he said

"I remember watching it, he was having a go at Arsenal, and I was thinking 'Is he going to come for me?'

"I actually spoke to him after

We had quite a good chat

He is entitled to his opinion but I just wanted to know.

"If it had come from a rubbish player I could say 'what are you talking about?' But it came from Paul Scholes.

"So I wanted to get to the bottom of it

I spoke to him, he explained it a bit better and told me what he thought I should work on

For me he was the best English midfielder of all time."

Wilshere accepts he must now fulfil his widely acknowledged potential

"(Scholes) was right in a certain way," he said

'He's young, he's got all this potential ' - you have to start putting that potential in.

"This season I have improved a lot, scored a few more than I have in the past and got a few more assists.

"That side of things, you can keep the ball and you can look good but it's those stats that matter

That's what I have to build on."

Scholes also criticised Arsenal as a whole for a lack of discipline, characters and leadership - traits they will need this weekend in the FA Cup final against Hull as they seek a first trophy since 2005

"We've been here before in the Carling Cup," Wilshere said.

The FA Cup is a trophy that, when I grew up, you remember

"We don't have to prove we have leaders to win this - we just have to win it."