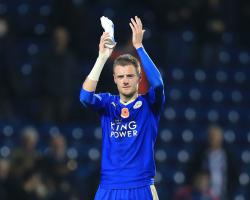 The Foxes' 18-goal top scorer insists they must ignore the hype surrounding their shock challenge for the Barclays Premier League.

Leicester are top of the table by five points and go to the Gunners on Sunday having beaten Manchester City 3-1 on Saturday.

Arsenal are third, level on points with Tottenham, but despite Leicester's lead Vardy believes they have to stay calm.

"If you start thinking about it too much it's going to affect you, it's as simple as that.

"We'll just continue to do exactly the same thing we've done all season.

"They're (Arsenal) up there, we're up there, (Manchester) City are, Tottenham, Manchester United might be 10 points adrift but the way this season's going those 10 points can be picked up quickly.

"We'll just take every game as it comes, knuckle down and hopefully keep picking points up."

Claudio Ranieri's side have lost just twice in the league all season, once to Arsenal when they went down 5-2 in September, and Vardy knows the challenge they face this weekend.

He said: "No doubt it will be tough (against Arsenal), we know the players they've got are world class but although we lost 5-2 when we played them last time we did show that we can hurt them.

"I think it'll be a matter of us tightening up a bit defensively which, as we've seen, we've kept a lot of clean sheets recently.

"It's going to be a good, entertaining game."

He worked under head of recruitment Steve Walsh at the Foxes but has now joined their title rivals, Press Association Sport understands

An account claiming to be from Wrigglesworth on social media confirmed the move.

"After three-and-a-half unbelievable seasons, working with amazing people, I am now starting a new chapter," he wrote

"It was a very difficult decision, leaving Leicester, but I had to take an opportunity that doesn't come round often.

"I only wish the best for Leicester in the future."