Kallstrom could be vital - Wenger 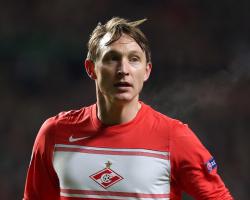 The 31-year-old's move from Spartak Moscow was the only incoming business concluded by the Gunners during the transfer window.

It has since emerged the former Lyon midfielder is set for an extended spell on the sidelines with a back injury, suffered while on warm-weather training with the Russian club

And Wenger confirmed following Sunday's 2-0 win over Crystal Palace the Gunners had been aware of the problem before completing the deal.

Arsenal will be hoping to have Kallstrom available as soon as possible, with fellow midfielders Jack Wilshere and Aaron Ramsey also injured, while Mathieu Flamini started a three-game suspension against the Eagles ahead of what is a crunch period in the Gunners' season.

Wenger said: "[Being fit at the end of February] is the best-case scenario

I am sure if you have played football you might have played with a micro-fracture of your vertebra without even noticing it because on a normal scan you don't find out.

"They [Spartak Moscow] will pay the first six weeks' wages.

Asked if he considering pulling out of the deal, the Arsenal manager said: "Yes, of course it crossed my mind

I would not have signed him if we had two or three more days to do something, but it was Friday night at five o'clock, so it was [a case of] you [sign] nobody or you do it under these conditions.

"I decided to do it because we might, because of the number of games we have now in February, need the players in March or April.

"There is a possibility [that he may not play], but as well there is the possibility that he scores us the winning goal that might be vitally important."

Wenger continued: "We could have gone without, but first of all you must identify a player who has the quality to play for us in January.

"Then, because we have the number of players needed in that area, [they have to be] not locked in a deal of three or four years, where you pay the players to do nothing.

"So to find a player on a free loan, of that quality, on Wednesday morning until Friday night, is not easy."

Nevertheless, Wenger accepted it was a move which could come back to haunt Arsenal as they go in search of a first trophy since 2005.

Are you wrong or right? You will only know at the end of the season," the Arsenal boss said.

Wenger said: "We are not against spending, but at the moment we are focused on the second part of the season, and at the end of the season we will see what we will do.

"You have announced a lot of transfers in your papers that have not happened, in many places, that means it is not as easy as it looks, even with money, to buy the right players in that period."