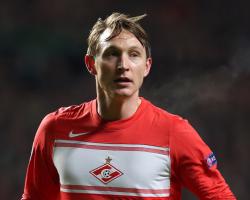 The 31-year-old travelled to London from Abu Dhabi, where he had been training with the Russian club during their winter break, and is expected to complete a loan deal until the end of the season, which will help boost an Arsenal squad weakened by Aaron Ramsey's injury setback.

At his scheduled media conference on Thursday morning, Wenger had ruled out a deal for Schalke's Julian Draxler, but confirmed he was looking to bring in at least one other player.

Kallstrom started his career at Djurgarden before joining French club Rennes and then on to Lyon in 2006, where he won the Ligue 1 title and Coupe de France, both twice.

Having played at the 2006 World Cup and also three European Championships, he left for Spartak in the summer of 2012 and made 10 appearances this season before the winter break.

However, any suggestion Arsenal were closing in on 20-year-old Schalke talent Draxler - valued at some ?37million by the Bundesliga side - were rejected by Wenger.

"The Draxler situation has been created by the newspapers, not by me," the Arsenal boss said.

"You ask me, what is that situation? I say nothing is happening on that front

He will stay at Schalke."

Wenger added: "We are open-minded and active

We look at the opportunities.

"We are still trying to bring at least one body in because we are a bit hit now by the red card for (Mathieu) Flamini, the setback of Ramsey and the fact that (Jack) Wilshere is not available, which I hope will be short term.

"We are in an area where we had plenty of players, suddenly we are a bit short

It is 80/20 and I am confident we will be able to do something today."

Arsenal drew at Southampton in midweek and were then knocked off the top of the table when Manchester City romped to a 5-1 win at Tottenham.

The Gunners, though, could regain the lead should they beat Crystal Palace on Sunday, with City hosting third-placed Chelsea on Monday night.

"The results are not made by the winter transfer market, they are made by the performances on the pitch

On that front we have shown we can be very competitive," said Wenger.

"Why should we not (believe)? We are in a position to be able to do it after 23 games with the squad we have available now, so why should we suddenly give up?"

Ramsey, 23, had been one of the stand-out performers in Arsenal's impressive start.

However, the Wales international has suffered a setback in his rehabilitation from a thigh problem.

"It is certainly a few weeks

It will be between four to six weeks

I count six, so I have no bad surprise," Wenger said.

Arsenal will be without Flamini for three matches following his red card at Southampton, while fellow midfielder Wilshere continues to recover from an ankle problem and should be fit to face Liverpool next weekend.

The 22-year-old made a total of 16 first-team appearances for Arsenal, and had loan spells at Wolves, Charlton and Fulham, but his development was hampered by a series of injury setbacks.

Frimpong, who won a first full cap for Ghana in a World Cup qualifier against Sudan in March 2013, hopes to rebuild his career with the Tykes.

Hopefully I can help the team achieve that this season," Frimpong said on Barnsley Player.

"I wouldn't say I'm fit yet, but the only way to do so is to play games

The more I play, the better I'll get."

Frimpong added: "It will be difficult, but it's very important you start off well and make sure your first game is a good game

I am quite confident I can do that.

There are some very good players in the Championship."