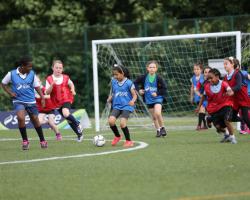 FA participation and development director Simmons has been a driving force behind the growth of the women's game.

And she was saddened to see Notts County Ladies go out of business last Friday, just two days prior to the Women's Super League starting.

Financial support from established football clubs is necessary as the women's game seeks greater investment, says Simmons, who was speaking as the Football Association and SSE launched a new initiative to increase participation of five to 11-year-old girls.

She told Press Association Sport: "It's devastating for the players, staff, the fans and everyone involved with Notts County.

"Women's football at the elite end is on a journey

Before the Women's Super League it was an amateur sport, predominantly run by volunteers and with players working full-time.

"At the moment there isn't enough revenue in the game without the support of men's football clubs or other partners investing for those players to be professional footballers.

"Whilst there is investment coming in, if those players are going to be full-time, the model does rely on men's football club money."

Professionalism is integral at the elite end of the sport.

The likes of Manchester City, Chelsea, Arsenal and Liverpool women can utilise the resources of their clubs, but there is still great potential and Manchester United, for example, do not have a women's team.

"What we've got to do is try to look at the bigger picture," Simmons added.

"It wasn't that long ago England players were giving up their holidays to play for England.

"We're trying to encourage and work with clubs to invest in the women's game, whether that's Manchester United or other clubs.

"The women's game in England could be really special

We hope all the clubs will invest."

The creation of 200 SSE Wildcats Girls' Football Clubs throughout England was announced on Wednesday.

The initiative is part of the FA's 'Gameplan for Growth' for girls and women's football, which is aiming to double participation in the women's game by 2020, from the current 2.9 million active players.

Simmons said: "We know that getting girls to play from a really early age is absolutely critical to give them the skills and confidence to enjoy the game and play long term.

The majority are boys in those.

That's why the Wildcats is girls only."

Plans are afoot to address participation falling away in the teenage years, too.

"We've got other initiatives in the strategy to focus on secondary schools," Simmons added.

"There's a range of things, but we know the big focus in effort needs to start at five-, six-, seven-years-old if we're going to get girls in and for them to play long term."

:: SSE Wildcats Girls' Football Clubs are a joint initiative between the Football Association and SSE for girls aged 5-11

For further info on SSE Wildcats and to find a session near you today visit www.thefa.com/forgirls