Keown- Wenger can rise above taunts 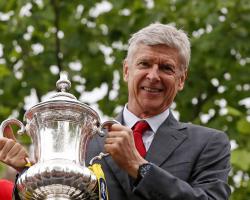 Former Arsenal defender Keown believes Mourinho knows full well Chelsea are in little position to accuse rivals of buying their way to the Premier League title given the Blues' history of big-spending under owner Roman Abramovic.

Wenger has not beaten Mourinho in 13 meetings between the two managers, who will lock horns once more in Sunday's Community Shield.

Keown believes the latest jibes will be water off a duck's back to Wenger, paling into insignificance alongside previous criticisms where Mourinho branded the French manager a "voyeur" and a "specialist in failure".

"At the end of the day if Abramovich hadn't arrived at Chelsea they were in serious jeopardy of going bankrupt never mind achieving what they have.

"So they've bought themselves out of trouble, and where they are now is down to the financial reservoir that they have.

"So to accuse Arsenal of the same thing, buying their way to the top, is a bit of an ironic comment from Mourinho.

"I think he's just being mischievous there.

"He has had a go at Wenger on more than one occasion, so this is quite light compared to some of the comments he's made about him.

"So I think Arsene would probably be happy with that in relation to everything else!

"There wouldn't be too many managers that could lay claim to the kind of record that Mourinho has against Wenger.

"Like any record that you have, when Arsenal went unbeaten for the whole season, you start to feel like you're invincible, and you're never going to concede a goal or lose a game.

"But he prepares his team not to fail against Arsenal.

"And he'll be doing that this weekend.

"He's very proud of that record, it's an outstanding record.

"Whether it's a hang-up for Wenger I don't think so, I think it's more of a case of beating Chelsea."

Keown won nine major trophies with Arsenal between 1993 and 2004, and now believes the Gunners will be in the running to claim this term's Premier League crown.

"I think they're in with a chance of winning the league," said Keown, speaking at the McDonald's and Football Association Community Football Day.

"If you go into a new season it's on your radar, it's one of the goals you set yourself but nobody, not any of the groups are completely convinced they're going to win it, no one knows.

"But it's important to have the belief you can do it.

"But I genuinely sense now among the players and the fans at the Emirates, that there's a sense of expectation and a feeling that Arsenal are getting ever closer and better equipped.

"Theo's been at the club now for 10 years and we're finally starting to see the full range of his talent.

"But I still feel that the best is yet to come from him.

"Whether that's down the middle, centrally we'll have to wait and see.

"By the end of last season he looked as if he was back to his best.

"And I think it's important to get these players under contract.

"There's always talk about new signings, but it's vital to get these guys on new contracts.

"I thought Santi was a revelation in central midfield towards the end of last season, and again he's a player that Wenger rates extremely highly."

:: Martin Keown was speaking at the McDonald's and FA Community Football Day, championing accredited clubs across England and encouraging youngsters to share their best goal celebrations through #CelebrateBetter