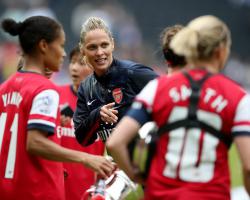 Goals from England's Kelly Smith and Japan's Yukari Kinga saw off Everton 2-0 to clinch Arsenal's 13th triumph in the competition and their second in succession under Kerr.

The Scot, who also guided the Gunners to Continental Cup success last season, had already announced her resignation after a poor start to the Women's Super League season and the final at stadium:mk was her farewell match.

"I'm just delighted for the girls," she told BBC2 afterwards

"They're a fantastic group of players and they deserved it today

"It was never about me today, it was all about the team

They focused all week in our preparation and they showed their talent and determination."

Smith, however, had a different take on things and said: "We did it for her

"We've got some champagne for her afterwards

"We lost eight players last season, it's taken us a while to gel

We've had a lot of critics at the beginning of the season, we're near the bottom of the league, but we proved a lot of people wrong

"It could be the turning point in our season

It was an unbelievable performance by the team."

It was Smith's third FA Cup win with Arsenal, in addition to four league titles and a UEFA Women's Cup, and she said: "It's the most special of them all

"I'm coming to the end of my career now, this will probably be my last FA Cup final so winning and getting the player of the match award is very special."