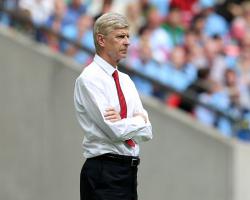 The Barclays Premier League club on Thursday held its Annual General Meeting at the Emirates Stadium, which was considerably less heated than in previous seasons following victory in the 2014 FA Cup final which ended nine years without a trophy.

Nevertheless, the delicate subject of transfer policy remained a thorny issue as shareholders demanded to know just why Wenger had not chosen to bolster the squad further before the transfer window despite having a healthy warchest - although one which chief executive Ivan Gazidis played down claims of being at some Â£200million of cash reserves as "inaccurate and superficial analysis"

Wenger accepted Arsenal need to bring in more cover, specifically at the back, given a growing injury crisis which has seen France defender Laurent Koscielny suffer from an inflamed Achilles tendon on which there is no specific time frame for recovery.

The chairman was, nevertheless, directly asked by one shareholder over whether the board was ready to make funds available should Wenger wish to bring in additional players.

Sir Keswick made it crystal clear where the decisions on football matters rested at the Emirates Stadium.

"I don't think that my wish or intention to double guess what Arsene Wenger wants to do - as you know, your board backs him 100 per cent

If he has a plan, we back him, if he doesn't have a plan, we keep quiet," the chairman said.

Wenger, who declined the opportunity to add to his chairman's statement, had earlier addressed the shareholders, and reiterated his belief in the squad's potential, but conceded more cover was needed for the battles ahead.

"I believe we have done remarkably well on the transfer market

I agree we could have bought one more player, (but) we did not find (him)," said Wenger, who rejected a chance to bring former captain Cesc Fabregas back from Barcelona before the Spaniard went on to sign for Chelsea.

"We are a bit short with the injuries we have (defensively), and I think we will rectify that in the transfer market in January."

Several subjects were addressed at the AGM, including whether the club had a succession plan in mind for when Wenger, who turns 65 later this month, eventually decides to step down, the cost of tickets, especially at away matches, while chief executive Ivan Gazidis used graphs to try to explain the need for continued development of all revenue streams to keep the club competitive

Arsenal return to Barclays Premier League action on Saturday against Hull, when captain Mikel Arteta could be back from a calf problem.

Mesut Ozil, though, will be out for the next couple of months with a knee problem which was suffered during the 2-0 defeat at Chelsea, but only confirmed after scans by Germany during the international break.

Wenger said: "(Do) you know how Ozil did the injury? Passing the ball with the outside left foot

He must have done that a million times.

"Ozil was on his own

He told me he just wanted to give the ball like that and heard a little crack.

"He did not tell me anything during the game, I did not even know."