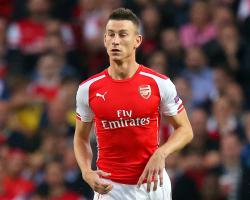 Press Association Sport understands Koscielny has a minor Achilles problem and the decision is precautionary, with the Gunners confident he will be fit for the Barclays Premier League clash at home to Hull a week on Saturday.

Les Bleus play Portugal on Saturday and Armenia next Tuesday in friendlies building up to their hosting of Euro 2016.

It is the latest injury for Arsenal, who on Wednesday saw Mesut Ozil return from Germany duty with a knee injury.

Ozil could be out for the rest of 2014 after sustaining the injury against Chelsea last Sunday, when he completed the full 90 minutes before complaining of pain in his knee.

The Koscielny news is another blow for Gunners boss Arsene Wenger, who has seen midfielders Aaron Ramsey and Mikel Arteta suffer injuries in recent weeks.

Ramsey will be out of action for another three to four weeks with a hamstring complaint although Wenger was slightly more upbeat about Arteta, who could return after the international break following a calf problem.