Koscielny- We never give up 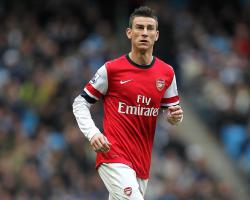 The Gunners go into FA Cup fourth-round weekend a point ahead of Manchester City and two clear of Chelsea following their 2-0 win over Fulham.

Much as they had done with their victory over Cardiff on New Year's Day, Arsene Wenger's men eventually wore down the Cottagers before finally making a breakthrough just before the hour.

Koscielny admits Arsenal cannot always be at their high-tempo, quick-passing best, but insists they have found a way to dig in and get the required result.

"We can't play 100 per cent all the time in the way we play, so there will be some moments in some games where we lack quality, where it will be more difficult, where it won't be pretty football, but we stay strong, we graft and we never give up." Koscielny said in the March edition of the official Arsenal magazine.

The France international continued: "Mentally we are stronger than ever. We have won some games this season that we would never have won last season.

"It [the spirit] was always there, but more perhaps towards the end of the season.

"We can feel this season there is something special in the squad. We have all understood that we can achieve something together."

Koscielny, who has developed a strong partnership at the heart of the Arsenal defence alongside Per Mertesacker, feels the "pressure is on" rivals City and Chelsea to deliver the championship because of their massive spending.

However, the 28-year-old is confident Arsenal can compensate with a strong team ethic.

"It is down to us to stay there, stay focused and stay united, keep fighting for each other, stay consistent and humble like in the first six months (of the season), and maybe it will be our year and we will win it."

Wenger, who could be set to shortly confirm he will extend his contract past the end of the season, has challenged his side to concentrate on themselves rather than what City or Chelsea might do over the final 16 games.

"At the moment we go through a period where it is always like that, in January, February, this is the period where you just want to be consistent and focus on yourself," Wenger said on Arsenal Player. "Then March, April is always [the time] to deal with the nerves."

The Spain international on Monday apologised after being photographed holding a placard that insulted north London rivals Tottenham, which was posted on Twitter.

Wenger feels Cazorla brings something special to his side's creative options and the midfielder hopes to continue his development.

"I am doing well at the moment," Cazorla said.

"In the last few games I have been getting better physically and my confidence has been growing.

"I hope this continues from now until the end of the season."

Cazorla added on the club's official website: "I had a bit of a bad time with my ankle problems and missed a few games, but I hope to put that behind me and get back to my best in order to help the team to achieve as much as possible."

Arsenal are looking to bring in some offensive additions to offset the loss of England forward Theo Walcott to a serious knee injury.

Juventus' Mirko Vucinic is one target, but Wenger was more keen on a loan deal than a permanent Â£10million switch for the 30-year-old Montenegro striker, who is also interesting Inter Milan.

However, with Nicklas Bendtner and Yaya Sanogo both closing in on a return to full fitness, the Gunners boss could well elect to go with what he has, which also includes German Lukas Podolski, who was unfortunate not to score when coming off the bench against Fulham.