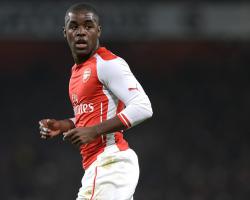 The Basque outfit, however, have yet to begin negotiations with the Gunners to acquire the Costa Rica international.

La Real, coached by former Everton and Manchester United manager David Moyes, are keen to reinforce their attacking line for the 2015-16 campaign.

When asked about Campbell, Real Sociedad president Jokin Aperribay said to TV station Teledonosti: "He is an interesting player for La Real.

"However, at this time there is no negotiation regarding a transfer.

"We have to analyse the financial conditions that this transfer would pose."

Campbell joined Arsenal in the summer of 2011 but has made just four appearances for the Gunners since.

The 22-year-old forward has spent three seasons out on loan at Lorient, Real Betis and Olympiacos.

Campbell came close to joining La Real in the winter transfer market but has played instead on loan at Spanish side Villarreal for the past six months.

"He was saddened not to come to La Real in January and he would happily come back to play in the Spanish league," Aperribay said.

"In any case we are in no hurry to make a signing.

"We need to be patient because the important thing is to sign the right player and to do so while respecting Real Sociedad's budget."

La Real have turned their focus on Campbell after failing in their attempt to lure English forward Danny Ings to San Sebastian.

Ings will join Liverpool on July 1 after his contract but Burnley expires.

"We knew for a while now," Aperribay said

"He told us that he was in talks with Liverpool and we knew that it was a club that he was keen to join.

"Moreover, the financial offer he received from Liverpool was very good

La Real finished 12th in the Primera Division and will not play in Europe next season.