Laurent Koscielny promises slow-starting Arsenal will gun for the title 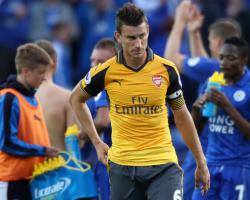 The Gunners drew 0-0 at champions Leicester on Saturday and remain winless after the opening two Premier League games.

Travelling fans again turned on Arsene Wenger and urged him to spend as the toothless visitors struggled to create clear chances.

But defender Koscielny insisted the Gunners, runners-up to Leicester last season, will battle for the Premier League crown as they hunt their first title since 2004.

We are Arsenal - we fight for the title

Every game we play we want to win the game," he said.

"This season will be very difficult because of the top clubs spending a lot of money on transfers, it's unbelievable

But sometimes the collective can be better than individual players

So we want to keep our philosophy and play football."

"You could see last week we lost Aaron Ramsey with an injury and now he's out for one month," Koscielny told arsenal.com

"When we have a summer tournament it's the same for every other team, not just for Arsenal

I'm sure every other team is the same

"The players come back later and need more time to be fit, to be ready for the game

Last week (we didn't play) because we weren't fit and it was important to have one more week for training to be fit this week, and you can see, no one got injured."

Morgan told the club's official site: "That's what you can expect from teams in this league, but it's a positive performance from us

"Everyone dug in - we were winning the first challenges, picking up the second balls and were very positive in our play

Hopefully we can continue with that."