Laurent Koscielny: Why Arsenal Should Do Everything in Their Power to Keep Him at the Emirates

​Shambolic, suspect, spineless. These are just a few words that could be used to describe Arsenal's defensive efforts for over a decade now.

However, at the centre of all of this lies a captain, a central defender, and a leader that the club has been so desperately crying out for.

While it is clear that new arrivals at the Emirates are essential if Unai Emery's side are to return to what the club once was, is an overhaul of invaluable current team members really the best path to take?

While it becomes apparent that Koscielny is looking for an exit after ref​using to travel with the Gunners on their pre-season tour of the United States, the reality of his return to French football becomes much greater. Rumours are beginning to swell, with Bordeaux emerging as the frontrunners to finalise what would be a tremendous signing. This, however, is simply not a sale Arsenal can afford to let happen.

Every great side consists of a core group of players that will give everything for the club and know what it means to wear the badge with pride. The departure of Aaron Ramsey to Juventus on a free transfer earlier this summer has left the Frenchman as the only remaining fragment of the club's dwindling backbone.

People can call, and rightfully so, for Stan Kroenke to invest a greater share of his wealth to the recruitment process at Arsenal. However, if there are no players left at the club who understand the philosophy and ethos of Arsenal, in many ways the real Arsenal will be stuck with misty-eyed memories of Tony Adams and Patrick Viera, rather than forging a new direction for the club that also holds true to those key values. Koscielny's 353 Arsenal appearances since he signed in 2010 for £8.45m are a sign of his consistency and loyalty. Also a crucial part in the 2014 FA Cup final, where he scored the equaliser against Hull, the solid center back evidently has more trophy-winning experience than much of the current Arsenal side.

Understandably, Emery is trying to build a legacy of his own in north London with his predecessor Arsene Wenger's reign a tough act to follow. A look to youth seems to be taking place at the Emirates as Arsenal announced the signing of 18-year-old Gabriel Martinelli from Brazilian side Ituano for a fee of £6m earlier this summer. 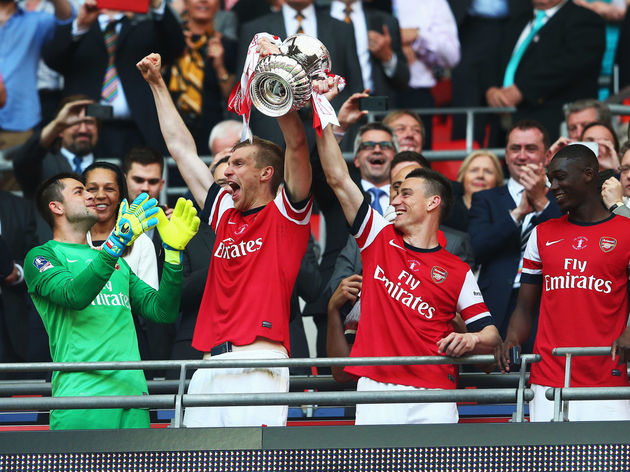 If Emery is to continue switching between four and five at the back, the current defensive situation is clearly not strong enough. As could be seen last season especially, players such as Shkodran Mustafi and Konstantinos Mavropanos are not at the level Arsenal need in order to regain ​Champions League football and more.

Losing arguably the best defender in the current squad, even with his age catching up with him, will only further deepen the crisis the club has found itself in.

​Arsenal seem to be at a crossroads where nobody knows what direction the club needs to take. The impact of having a strong captain in the middle of ongoing change should not be underestimated and Koscielny should not be treated as just another player. In many ways, paired with a lull in investment, letting the club captain leave would symbolise a lack of ambition to gain anything above the mediocrity they have displayed in recent years.