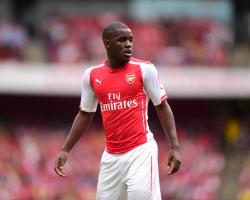 Palermo have been in talks with Arsenal to sign the young striker, but they failed to reach an agreement with the North London outfit and now after Palermo gave up on him, Lazio are now being linked with the Costa Rica striker

The 23-year-old player joined Arsenal on 2011, but he had multiple loan spells with Lorient, Real Betis, Olympiacos and Villarreal.

Arsene Wenger said that he is hoping to keep Joel Campbell at the club according to the official club website.

ÃâAt the moment he is here and personally I would like to keep him,Ãâ Wenger said.

ÃâI will have to sit down with Joel because I rate him highly as a player and personally if he stays here I am very happy.Ãâ

Campbell who has earned over 45 caps for Costa Rica made his competitive Arsenal debut as the club won the 2014 Community Shield.