Tuesday night offered brief reprieve from what has been a largely frustrating season so far for Eddie Nketiah.

The 20-year-old's hat-trick during the England Under-21s' 5-1 victory over Austria took his record for the Young Lions to seven goals in seven games.

And yet, despite his impressive form at international level, the Arsenal striker - who joined Leeds United on a season long loan in August - has found himself predominantly on the bench at Elland Road this year.

Speaking to ​Sky Sports after the game Nketiah admitted he is not happy with his current bit part role.

"Obviously, I will never be happy with being on the bench. I want to play. I pride myself on being in the team. I think I am good enough to be in the team.

"All I can do is put in the performances that I do. When I come on [to] try and contribute and I think with the chances I have had, I have done really well." Nketiah is yet to complete 90 minutes this season, but despite this, he still has as many goals as Patrick Bamford, who eccentric coach Marcelo Bielsa has generally preferred up front.

Goalscoring has been a real issue for ​Leeds this season, who currently sit two points behind leaders ​West Brom in fifth. Despite averaging 60% possession in the Championship this season, their inability to finish teams off has led them to drop crucial points against the likes of ​Swansea, ​Charlton and ​Derby that could have seen them comfortably in the driving seat for promotion.

With this in mind, Bielsa's stubbornness in continuing to start Bamford, who has scored a goal every 219 minutes in all competitions this season, over Nketiah, who has one every 82, seems all the stranger. Leeds's owner Andrea Radrizzani ​came out in defence of Bielsa's decisions this season, and it seems as though Nketiah is going to have to continue to bide his time in Yorkshire.

But time is something he simply doesn't have. In N ketiah's absence ​Gabriel Martinelli has put himself in the frame to be the third choice striker at the Emirates behind Pierre-Emerick Aubameyang and Alexandre Lacazette.

He will not want to end up like his teammate Bamford, who himself had a promising youth career at a top Premier League side in ​Chelsea, before a series of poor loan moves saw his game time limited and his chances of an elite level career ended. 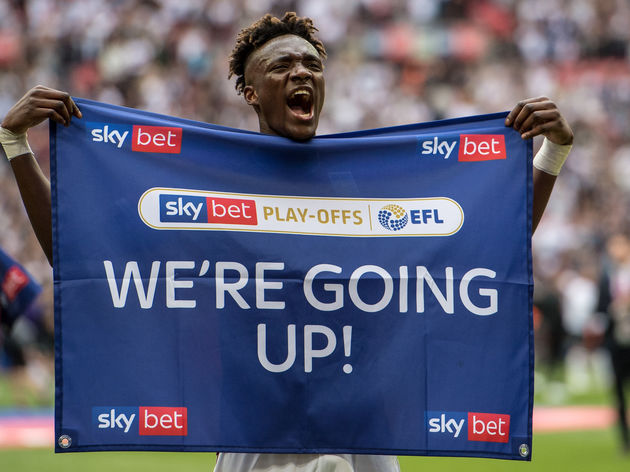 There is no doubting that Nketiah has the talent to follow more in the footsteps of someone like Tammy Abraham, who, following a prolific Championship loan spell with ample game time at Aston Villa last season, is currently the Premier League's joint top scorer, and has been recalled to the England squad.

The ​Arsenal youngster does seemingly have options. According to ​reports, Bristol City are interested in taking him on loan, should Arsenal decide to recall him in January.

The Robins were beaten to Nketiah's signature by Leeds at the very last minute in the summer. It is believed their manager Lee Johnson had even met with the player.

But for now he remains a Leeds player, and the Whites will resume their quest for promotion in their centenary game against Birmingham this Saturday. If they want to achieve that aim, then surely now they must start to use one of England's most promising strikers.