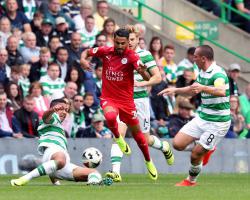 Riyad Mahrez dazzled in the Premier League last term, helping to secure an unlikely Premier League crown for Leicester and winning many admirers around the world for his goals and silky interplay

Mahrez and his agent are understood to have met with the Gunners manager and made his mind up about a move during the meeting says reports in Le Buteur.

Leicester are obviously very keen to keep hold of their talisman with a ÃÂ£100,000-a-week new contract waiting to be signed.

Joining Leicester in 2014 against the advice of friends and family who thought the Championship would be too physical, his three seasons have taken him from the Championship to relegation survival and Premier League champions

The question now is will he make it a fourth season or has he already decided on his next move?