Lethargic Arsenal not ready yet - Wenger 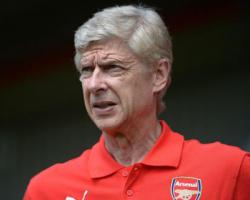 Having routed Benfica 5-1 on Saturday, Arsenal fell to a solitary Radamel Falcao goal the following day, leaving Wenger to brand their performance "static, lethargic, and not convincing at all".

Wenger explained that he had removed Olivier Giroud at half-time because the French striker was "not ready at all", and the former Montpellier man was not the only player who appeared fatigued.

In addition, Mesut Ozil, Per Mertesacker and Lukas Podolski are all guaranteed to miss the start of the season after their World Cup-winning exploits with Germany, but Wenger says his side still have time to get in shape.

It's part of pre-season," he told a post-game press conference at the Emirates Stadium.

The positive is that we had to dig deep for some players to play today (Sunday) and we got no injuries."

Arsenal face Manchester City in the Community Shield on Sunday before opening their Premier League campaign against Crystal Palace the following weekend.

Asked if Arsenal will be ready for the showdown against City at Wembley, Wenger replied: "We will be

And Man City may be as well."

Wenger was encouraged by Sanchez's second-half display, but when asked if the former Barcelona forward can expect to play in the centre on a regular basis, he replied: "I don't know yet, honestly.

"Giroud is not ready at all

I thought I'd take him out because he didn't look ready and it was an opportunity as well for me to see Sanchez at centre-forward.

"We looked better in the second half than in the first

But as well because Chamberlain gave us something that we needed -- some penetration, some power."

Wenger also praised Calum Chambers, the new signing from Southampton, who produced another assured performance despite playing out of position at centre-back.

"He's one of the players over the two games who played very well," said the Arsenal manager.

He's not phased by the quality of the games, by the opponent, for his first time at the Emirates at 19 years of age.

"He's one of the satisfactions of the weekend."

Falcao's goal was his first since he ruptured the anterior cruciate ligament in his left knee in a French Cup game in January, which forced him to miss the World Cup.

The 28-year-old Colombia star has been strongly linked with a move to Real Madrid, and while Monaco coach Leonardo Jardim described him as "indispensable", he also conceded that "anything is possible, especially in the transfer window".

Falcao reacted with glee after heading in the game's only goal in the 37th minute and Jardim said that the striker's celebration reflected his relief after more than six months on the sidelines.

"We know that Falcao, as well as being an international player of great quality, is a player who takes a lot of pleasure in what he does," said the Portuguese.

Hopefully this will be the start of great things to come."